Harry Simon Junior 'not as good as dad' 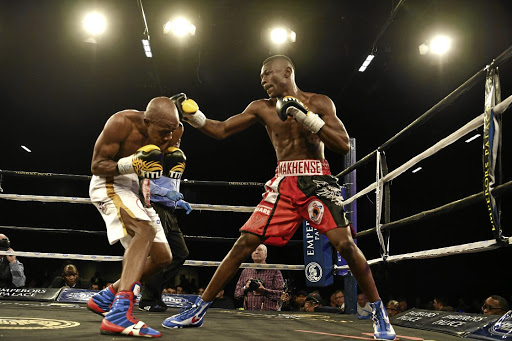 But Rothmann does not think the 23-year-old hot prospect is as a good as his father, who retired undefeated in 31 fights in 2018.

Rothmann trains IBF Continental Africa and WBA Pan African junior-welterweight champion Jabulani Makhense whose belts will be on the line against Simon Junior on
Saturday night next weekend.

Their fight - one of the four bouts to be organised by Golden Gloves - will take place at Emperors Palace where Makhense has won all his nine fights. Simon Junior is also undefeated in 11 fights, with nine knockouts.

The pressure is on for Brandon Thysse going into his eagerly awaited rematch with Boyd Allen at Emperors Palace in Kempton Park.
Sport
1 year ago

"He has nine knockouts and you have to respect his power," said Rothmann, who warned his fighters to "respect the opponent's power but not fear it".

"To dominate this guy, you can't slug it out [if you] have boxing skills, which Jabulani has. We've worked on many new things because if I don't learn further Jabulani is gonna get beaten. I've got to keep Jabulani thinking.

"We are going up against a big puncher. I don't think he is as good as his dad but even if he is we are going in there with the mindset of fighting Errol Spence Junior."

Spence Junior is the enormously talented and hard- hitting American who holds the WBC and IBF welterweight belts.

"We will defend our titles successfully," promised Rothmann, whose charge would only say: "I strive to be the best and we will see next week who is the best."

Trainer Tobias can't wait for Simon to show off his skill

Tough-talking Tete has his eye on the main prize

No one actually believes that Zolani "Last Born" Tete has psychic abilities but the boxer who punches like a trip hammer says he has seen the future. ...
Sport
4 years ago

IF Phillip Ndou does in the ring on Saturday night what he has been doing in the gym, then Namibian fans will regret signing up the knockout artist ...
Sport
7 years ago
Next Article