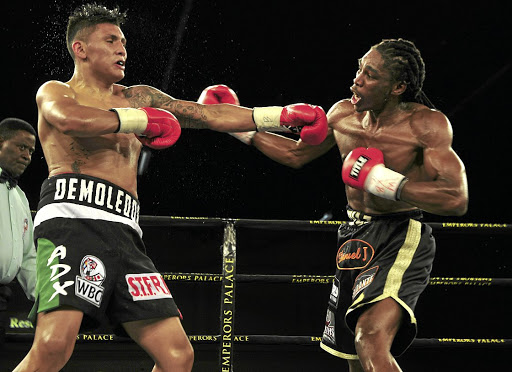 Thulani Mbenge exchanges leather with Diego Cruz in September. Mbenge's next fight is on December 8 against Miguel Vasquez /Veli Nhlapo

A loss in boxing does not define who a boxer is and neither should it be seen as the end of the road.

Instead any boxer must know that age is their natural opponent. A study has shown that until the age of 30, the body is on the upswing, building itself, getting stronger and stronger.

Thulani Mbenge should use those findings as a motivation. The 28-year-old fighter has not been his bubbly self since he tasted defeat in July.

He had previously won the ABU, WBC International, SA and IBO welterweight belts since turning professional in 2015 and was undefeated after 15 fights.

But his reign as the IBO champion ended in July when he lost in his second defence to Sebastian Formella.

Mbenge should learn from old time greats like Thomas Hearns who revealed after losing his first fight to Sugar Ray Leonard in 1981 that the defeat for the WBC and WBA welterweight belts served as a fuel to his career. "It [the defeat] just made me hungry," said Leonard after that loss.

Some boxers see a loss on a record as signs that a fighter is not as good as some believe. But it all depends on who the boxer fights. Mbenge takes a step in a journey to redemption on March 28 against Katembo Kuvesa for an ABU belt at Riviera Resort in the Vaal. The fight will form part of the tournament that will be staged by TLB Promotions of Joyce Kungwane.

Not a lot is known about Kuvesa, and such opponents can be very dangerous. But it all depends on Mbenge's mental strength and how he views that one loss to his career.