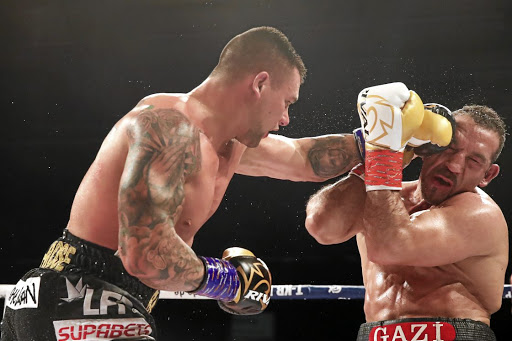 The naysayers who say referee Leszek Jankowiak from Poland stopped the fight too soon between young, bigger and heavy-punching Kevin "Two Guns" Lerena and Firat Arslan got it all wrong.

Actually the fight - Lerena's sixth defence of the IBO cruiserweight belt at the EWS Arena in Goeppinggen, Germany on Saturday night - was stopped by Arslan's people.

They threw in the towel after Lerena had wobbled their man with a series of punches.

The referee was just acting on those instructions.

Arslan won only the fourth round and then the fight which took place in front of his home crowd deteriorated.

Lerena improved to 12 knockouts in 25 wins against a loss.

Kevin Lerena promises another stoppage as he hunts title

Kevin "Two Guns" Lerena's word is his bond - when the reigning IBO cruiserweight boxing champion promises to knock you clean out, he just does that ...
Sport
1 year ago

Lerena, 22, denied the 49-year-old former WBA champion the opportunity to become the oldest active boxer to win a world title.

Arslan suffered his fourth stoppage in nine losses against 47 wins with 32 knockouts and three draws.

"Victory says it all. I battered him badly. I put him away and the referee jumped in and stopped the fight after the towel had been thrown in," said Lerena who has now won 14 bouts in a row since losing to Johnny Muller in 2014.

Lerena avenged that loss with a stoppage.

There were talks prior to meeting Arslan, that he would face interim WBA holder Ryad Merhy from Ivory Coast who is based in Belgium. Lerena is rated No 2 by the WBA.

Trained by Peter Smith, Lerena said: "Look, I had to deal with Arslan first and then let's wait and see what happens next."

Great world boxing champions are defined by their will to fight anywhere.
Sport
1 year ago