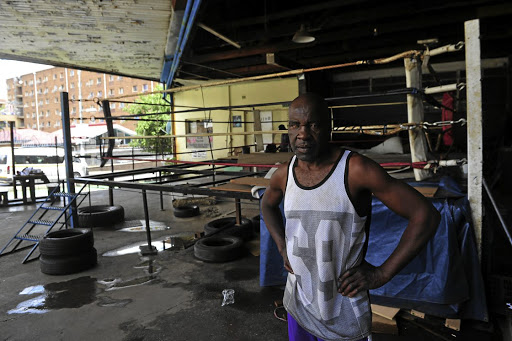 One chance is all one needs in life, says boxing trainer George Khosi who has always been remembered by promoters when they needed fighters to serve as cannon fodder to build the records of their preferred boxers.

Khosi is a former amateur boxer who has been honing the skills of fighters for more than two decades at his makeshift Hillbrow Boxing Gym on Claim Street.

The brainy quote, "one chance is all you need", was made famous by American track legend Jesse Owens.

Khosi's amateur boxing career was cut short after being shot and left for dead after an attack in Hillbrow in the 1980s.

He says that incident left him with three bullets in his legs.

Khosi says he came from Limpopo and has lived in Hillbrow for more than three decades.

'We had a successful 20l9', Lebo Mahoko says

The excitement of dreams coming true is beyond any description of words.
Sport
1 year ago

He then decided to pass on his love of boxing to aspirant boxers in his area, which is known for overcrowding, crime, unemployment, drugs and prostitution.

Speaking to Sowetan this week, Khosi used Owens's quote to describe the turn of events in his favour after the unheralded trainer guided unknown newcomer Simon Dladla to becoming the South African junior-middleweight champion on December 16.

"I told you last year that I will produce a champion," he said.

That was after Dladla had won the Gauteng title in Kagiso.

Dladla is from Bethlehem in the Free State but is based in Hillbrow.

Dladla came back from a knockdown by Khensamahosi Makondo, to give him a taste of his own medicine in the second round.

That fight - staged by Lebo Mahoko's Dream Team - took place at Intabazwe Community Hall in Harrismith in the Free State.

Said Khosi: "I have groomed a number of boxers who were later taken away from me but I never gave up because boxing is my life. I always maintained that one day I will produce a champion if given the opportunity. Give me and my fighters that one chance."

If boxing champions are like volcanos that erupt ever so often, then surely Simon Dladla is that champion.
Sport
1 year ago

Alan comes into his own in SA boxing.
Sport
2 years ago
Next Article