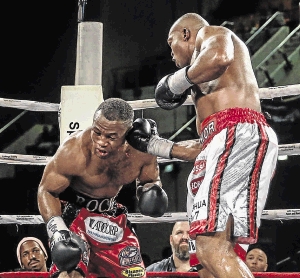 Ilunga 'Junior' Makabu punishes Thabiso 'The Rock' Mchunu en route to knocking him out in the 11th round of their WBC cruiserweight title eliminator.
Image: Nick Lourens

The Democratic Republic of Congo - which hosted the iconic Rumble in the Jungle heavyweight boxing championship at Stade du Mai 35-years-ago - is on the verge of producing its first ever WBC champion.

In October 1984, Muhammad Ali ended the reign of George Foreman as the WBC and WBA heavyweight champion in that fight staged by controversial American promoter Don King in Kinshasa.

Makabu from Kananga in Kinshasa is trained here by Damien Durandt whose father Nick introduced Makabu to pro boxing in 2008.

The spotlight now falls on the 29-year-old Damien who took over the reins from Nick when he retired in 2016.

It will be the second bite at the cherry for Makabu, who has won several belts including the WBC International and Silver belts. In his first attempt, he lost to Englishman Tony Bellew in Manchester in 2016.

Makabu bounced back very strong - chalking up seven straight wins with six stoppages - to be in line for the vacant title.

"This is a very big fight for myself as a trainer," said Durandt. "Junior fought two eliminators to be at this position. The fight for the vacant WBC Silver against Dmitry Kudryashov and his defence against Aleksei Papin were for the elimination and the No 1 position in the cruiserweight.

"We had nine weeks in camp overseas and my man is in top shape."

Makabu has recorded 24 knockouts in 26 wins against two losses while Cieslak is undefeated after 19 wins and 13 knockouts.

Ruann "Giant King" Visser's four-hour operation to the left elbow has impacted negatively to the career of this heavyweight champion.
Sport
2 years ago
Next Article