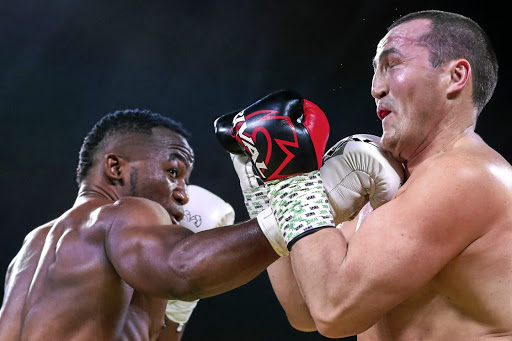 Thabiso Mchunu lands a punch to the chin of Russia's Denis Lebedev in their bout for the WBC Silver cruiserweight title at Ivan Yarygin Sports Palace. / Donat Sorokinvia /Getty Images

Written off as a has-been, the sleeping giant of South African boxing, Thabiso "The Rock" Mchunu, has awoken and his future is shining bright once again.

This after his lopsided points victory over former WBA champ Denis Lebedev for the WBC silver cruiserweight belt in Russia last month. The scores were 120-107; 119-108 and 115-112.

All of a sudden Mchunu is on the verge of challenging for the actual WBC belt which is currently vacant.

Mchunu's emphatic defeat of Lebedev - the former WBA champion -in front of his fans forced the Russian to quit the sport he had served since 2001.

Mchunu also left some naysayers locally eating humble pie because they had already written him off.

Trained in Johannesburg by Sean Smith, Mchunu from Cato Ridge in KwaZulu Natal said: "I am very much excited; I need to push harder.

Thabiso "The Rock" Mchunu could bounce back into contention for the WBC cruiserweight if he wins the WBC Silver title which will be at stake in the ...
Sport
2 years ago

"The future looks bright. The year 2019 was not a good one for me because most fights that I had been promised did not happen."

He said it was not an easy feat to achieve victory on foreign soil.

"You know fans can easily mislead judges against a visiting boxer.

"Lebedev's right fist grazed my ear and the noise from the crowd was such that it got me worried.

"I mean, I had been hitting him with an average of five punches [per minute]," he said.

"That is when it dawned on me that I had to beat this man convincingly and avoid having to bite my teeth waiting for the scores."

He has previously won the WBA Pan African (twice), SA and ABU (each twice) and the NABF belts in a career spanning 12 years.