Kevin Lerena puts in the graft for title defence 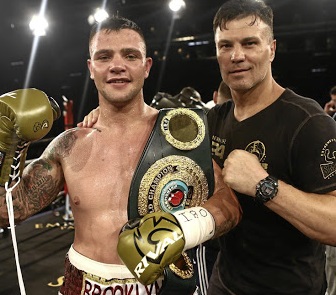 While the mood was festive for all Boxing SA licensed fighters during the Christmas holidays, Kevin Lerena's armpits were dripping wet with sweat from his usual rigorous sessions.

The highest paid local pro boxer - who still trains like someone broke - is preparing for the sixth defence of his IBO cruiserweight belt in a battle of left handers against vastly experienced veteran Firat Arslan in Germany on February 8.

"I had a Christmas break but not too festive," said the 27- year-old Lerena who defended his title three times last year.

"I quickly had to get back to hard work; this is my job and actually my life which I chose under no duress."

The former horse-racing jockey last fought in September when the perfectly chiseled champion easily dispatched Switzerland-based Macedonian Sefer Seferi in the third round.

Seferi, who could not come to terms with Lerena's amazing hand speed and power, drew with Arslan for both the WBO Inter-Continental and Global Boxing Union belts in 2018.

But that says nothing about Arslan's capability and in fact it would be foolhardy of Lerena to read too much into Arslan's age which is 49 years old.

He is a formidable opponent - rated No 3 by the WBA, a spot above Lerena.

Arslan is rated No 6 by the IBF which has the reigning IBO holder in its fourth spot.

A lot more than the IBO belt will be at stake when they collide in Germany.

Lerena is yet to lose outside home since he tasted defeat to Johnny Muller in 2016, a loss he later avenged with a stoppage. Lerena has knocked out 11 of his 24 victims while Arslan has 32 knockout wins in 47 victories against eight losses and three draws.

Arslan began his professional career in 1997. He captured the interim WBA cruiserweight title with a split decision win over Russian Valery Brudov in 2007.

Later that year he bested 43-year-old Virgil Hill for the WBA title but lost it to Panamanian Guillermo Jones in 2008, one day before his birthday. After the loss to Jones, Arslan took an extended leave from boxing and returned almost two years later to face unheralded Steve Hérélius for the interim title.

At the end of the 11th round he was unable to continue because of a syncope (a temporary loss of consciousness usually related to insufficient blood flow to the brain. It's also called fainting or passing out).

What a year 2019 was! Our reporters Bongani Magasela, Sihle Ndebele and Gomolemo Motshwane look back on the year that was in sport.
Sport
1 year ago

'Two-guns' to defend IBO title for the sixth time

Challenger Arslan is no pushover
Sport
1 year ago
Next Article