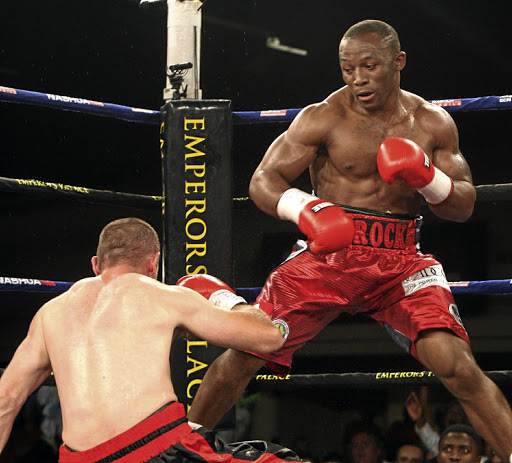 Thabiso Mchunu needs to win the WBC Silver belt in Russia tomorrow to be in contention to challenge for the WBC cruiserweight championship.
Image: ANTONIO MUCHAVE.

Thabiso "The Rock" Mchunu could bounce back into contention for the WBC cruiserweight if he wins the WBC Silver title which will be at stake in the battle of left handers against Denis Lebedev in Russia tomorrow.

Mchunu is rated No 8, a spot above the vastly experienced former WBA holder, who has only two losses in 35 fights. Mchunu has 21 wins and five losses, and his entourage have been in Russia since Monday.

Trainer Peter Smith said the public there view the fight as a very big occasion since 40-year-old Lebedev is a such a popular name.

"He is very relevant to the boxing community in Russia," said Smith yesterday. "He reigned supreme as the WBC champ for six years. He retired eight months ago, but decided to return. Personally I think it's going to be his last fight."

Smith added: "Nonetheless, I am overwhelmed at the magnitude and eagerly awaited bout. Thabiso in is the best shape, he's been in for a very long time. I expect a very hostile crowd and tough conditions."

Smith - who guided the left-hander to winning the SA, NABF, ABU and belts - wants nothing, but a convincing win that will put the cruiserweight division on notice.

"Lebedev's name will put a very prominent feather in Thabiso's cap," he said.

"It feels good to fight abroad on occasions like this; you often get more credit and appreciation than back home. The winner could expect to be the next in line for the WBC title."

It has been announced that SA-based Congolese Ilunga "Junior" Makabu will oppose Michal Ciesilk for the vacant WBC title in Congo in January.

Hungry Shihepo bails out of bout

But promoter says boxer was well fed
Sport
2 years ago

'Bulldog' steps up a weight division with two new titles

He stops Dlamini in middleweight
Sport
2 years ago

Imms Moses has warned the South African fight public about what is in store for them this weekend.
Sport
2 years ago
Next Article