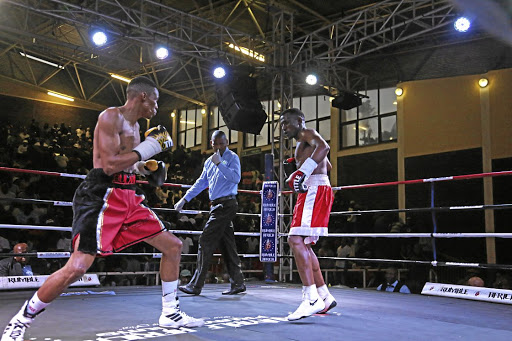 Lebo Mahoko explained yesterday that it was the concerted effort between him and the Maluti-a-Phofung local municipality to inculcate a culture of clean living, especially among the youth of Intabazwe, that made them take his tournament there.

Intabazwe is perched on a hilltop a few kilometres away from Harrismith.

The tournament - headlined by the 12-rounder for the vacant SA junior-
middleweight title between Simon Dladla and Khensamahosi Makondo - will take place at Intabazwe Community Centre on Monday evening.

"Intabazwe is one of the areas that is affected badly in terms of socio-economic [issues], hence we decided to take it there," explained Mahoko, who has added a
10- rounder for the Free State lightweight title between Tello "King Razor" Dithebe and Anthony "Pitbull" Molisane.

"Tello will make his debut at lightweights, so I expect fireworks," said Mahoko, who is convinced that Zolile Miya from Soweto and Tisetso Modisadise from the North West will thrill fans with their abilities.

"People must not blink, [for they will miss action]. But Miya blows hot and cold while Modisadise is a newcomer with a heart of a lion. I also have Jackson Kaptein, a newcomer from Freedom Square in Bloemfontein, in the programme against Lucky Makhubela."

Makhubela is a journeyman from Mpumalanga. "I also have Vuyani Kosana from Bloemfontein against Charles Ondieke from Congo," he said, adding that entrance will be free and action will begin at 5pm.

Often boxing fans wish for certain match-ups to happen but in many instances these do not materialise.
Sport
2 years ago
Next Article