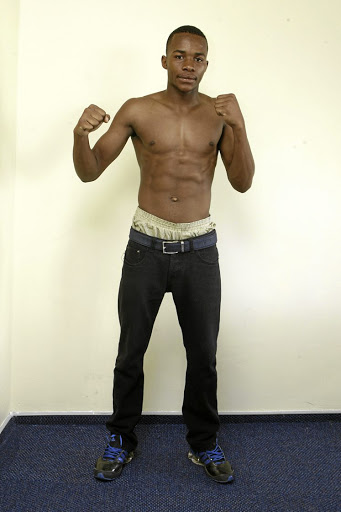 Anthony Moloisane is in a fight that doesn't promote his career right now./Mabuti Kali

In a rather confusing boxing match, Anthony Moloisane and Aphiwe Mboyiya will meet in the main bout - a
non-title eight-round contest - of Rumble Africa Promotions tournament at Mdantsane Indoor Centre on Sunday.

Moloisane from the Free State, who is trained in Johannesburg by Sechaba Mabuya, is rated No 5 in the junior lightweight division where Phila Mpontshane rules with an iron fist as the domestic champion.

On the other hand, Mboyiya, whose career is guided by Kholisile "KC" Cengani at Duncan Village, is rated No 9 in the lightweight class.

That weight division does not have a national champion after Ayanda Nkosi vacated that belt after capturing the WBF belt.

The fight on Sunday does not make any business sense. Moloisane could forfeit his top spot if he loses.

The boxer - who gave a very good account of himself against Mpontshane last year - is also fresh from back-to-back losses in May and July.

Instead of carefully picking and choosing who he fights now so that he protects his rating, Moloisane risks it all in a fight that is meaningless to his career right now.

This match-up works magic for Mboyiya, who will be involved in his second fight,
after coming back from a two-year ban for failing a dope test.

Mboyiya defeated Xolani Mgidi on June 30 and that win earned him the No 9 spot in the national rankings.

Victory will see him move up the rankings.

Phumelela Sobahle, who sheepishly gave up in round five against Michael Mokoena in July, makes a comeback against Siphesihle Mntungwa.

Action in this development tournament will begin at 2pm.