'Two-guns' to defend IBO title for the sixth time 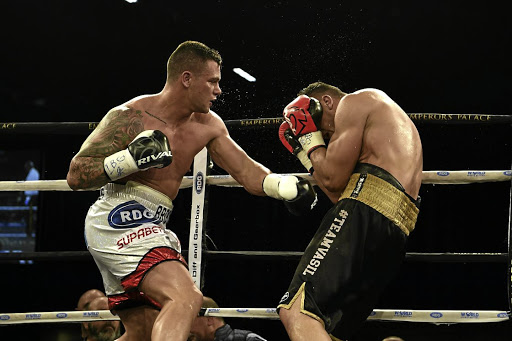 Kevin "Two Guns" Lerena will defend his IBO cruiserweight for the sixth time against Firat Arslan in Germany on February 8, Golden Gloves fight publicist Brian Mitchell announced during an interview with Lerena.

"I am very happy with Rodney Berman and Golden Gloves who have been good to me," said Lerena, who will face the highly-rated 49-year-old German in a fight Mitchell said will also be an eliminator for the WBO cruiserweight belt.

Arslan is rated No 2 by the WBO and fifth by the WBA which has listed Lerena on No 6 position.

"I am very grateful. I am at international stage now, not to say I wasn't before. But on the stage there is more push with Berman, so powerful in boxing himself.

"With Frank combining, we will be a force to be reckoned with. It's up to me to continue winning fights, and put on good display of boxing. I am looking forward to be co-promoted by Rodney and Frank," said Lerena

Arslan is the former WBA champion with 47 wins in 58 fights.

He has chalked up 13 wins with 10 stoppages, and a draw with Sefer Seferi. He lost to Yoan Pablo Hernandez for the IBO belt in 2014. Lerena knocked Seferi out in three rounds at Emperors Palace last month. This was the IBO champion's 11th knockout in 24 wins against a loss.

Konkco no match for Thailand champion
Sport
2 years ago

The boxing world wants to see the second instalment to the Jabulani Makhense versus Michael Mokoena series due to its competitive closeness, but it ...
Sport
2 years ago
Next Article