'Bulldog' steps up a weight division with two new titles 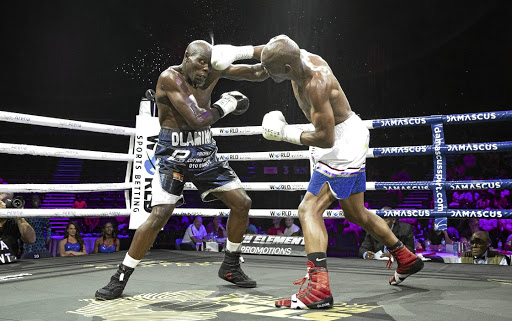 SA junior-middleweight champion Nkululeko Mhlongo jolts the head of Walter Dlamini en route to a fourth-round stoppage to win both the SA and WBA Pan African middleweight belts in the Sun Arena in Pretoria on Sunday.
Image: Nick Lourens

Mhlongo, from Eshowe in KwaZulu-Natal, also took home the WBA Pan African belt. Mhlongo, who was ushered to battle by trainer Vusi Mtolo, remains the only national champion from KZN.

Dlamini, who was the only national champion currently from Limpopo, was saved from total destruction by _competent referee Simon Mokadi.

Dlamini won the first two rounds easily but Mhlongo - a natural slow starter - turned the tables in round three.

Dlamini was saved by the bell. A revved-up Mhlongo pressed the action, jolting Dlamini's head with left and right hooks, prompting Mokadi to rescue him.

"Winning a new belt in another division makes me very happy because I made history," said Mhlongo.

"I am going to defend this title and move up to super middleweight where I intend to win my third belt."

Mtolo said: "This is my first SA championship and I know there are more coming. I am not shocked by what has happened. I expected it; we studied Dlamini.

"If Mhlongo can bulk up muscles, then we will move up to super middleweight and win another title which is held by Rowan Campbell."

Dlamini's stablemate Smangele "Smash" Hadebe lived up to her moniker by smashing Thema Zuma in round four while Thabiso Mchunu defeated Wilberforce Shihepo by a TKO3.

Other results (both 4 rounds):