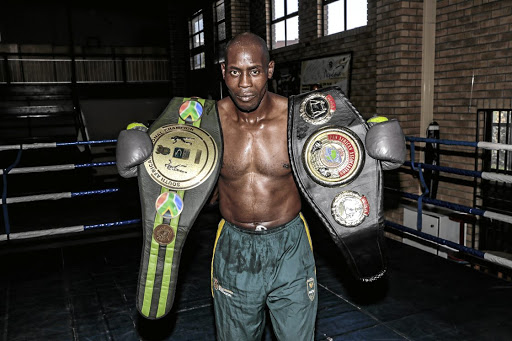 No one, not even Nkululeko Mhlongo who is touted as the enormously talented fighter of this era, will take the SA middleweight belt away from Walter Dlamini.

The defending champion issued the warning ahead of his defence against Mhlongo at Time Square in Pretoria on Sunday. Their eagerly awaited 12-rounder - Dlamini's first defence of the domestic
title he won in 46 seconds in December - will headline the Battle of the Warriors five-bout card of promoter Janie Hebler.

"Any contender, including Nkululeko, in the middleweight division who wishes to be the SA champion will only get to become one after I have relinquished it. Not when I am still holding it," warned Dlamini yesterday.

"If Nkululeko thinks he's going to take it away from me on Sunday, then he better wake up because clearly he's having a bad dream. I will fight until the bitter end."

Moruti "Baby Face" Mthalane says compatriot, Zolani "Last Born" Tete, should use his reach and height to his advantage when he defends his WBO ...
Sport
2 years ago

Dlamini refers to the BSA championship belt as his meal ticket which enables him to put food on the table for his family. The 38 year old is a full-time boxer.

Winning the national belt from Wade Groth was a blessing because the purse money he gets to defend will be far better that what he has been earning.

To those who say he is living on borrowed time as a boxer at 38, Dlamini, who is trained by Lion Hunter, said: "My age encourages me to train even harder than before. I don't smoke or drink; I am a Christian, so age is just a number."

Dlamini's foe Mhlongo is undefeated as the SA junior middleweight champion. The stylish boxer trained by Vusi Mtolo wants to win his second national boxing title in two weight divisions. "I am bringing pain and suffering," he warned. "This could be Walter's last fight."