Mashitoa next in line to challenge SA champ Mchunu 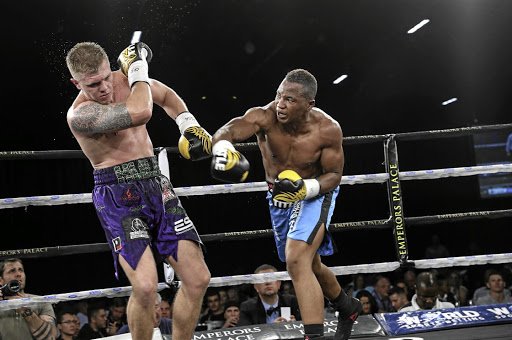 Lebo Mashitoa connects with a straight right to the head of Keaton Gomes. Mashitoa beat Gomes hands down for the Gauteng title over 10 rounds last month.
Image: Nick Lourens

Mashitoa crowned his commitment with the provincial title last month.

Akani Phuzi is the No 1 contender for Mchunu's domestic title, but trainer Alan Toweel Junior has made it clear that the match-up with Mchunu will not happen now because his charge is still a work in progress.

Chris Thompson is rated second but chances of him challenging Mchunu are minimal. They are stablemates under trainer Sean Smith.

Thomas Oosthuizen, who is rated third for Mchunu's title, cannot walk straight into a title fight. He must redeem himself first after losing two fights in a row - the last being to seven-fight novice Aleksei Egorov in Russia on March 23.

Mchunu has not defended his title since winning the national belt in December.

He has 20 wins in 25 fights, while Mashitoa has seven wins in eight fights.

Meanwhile, retired flyweight professional boxer Jacob Mazibuko says all boxing veterans and religious boxing followers will have a meeting on Sunday afternoon at Masikane's Kitchen, which is known as Mmesi Park, in Dobsonville, Soweto, from 1.30pm.