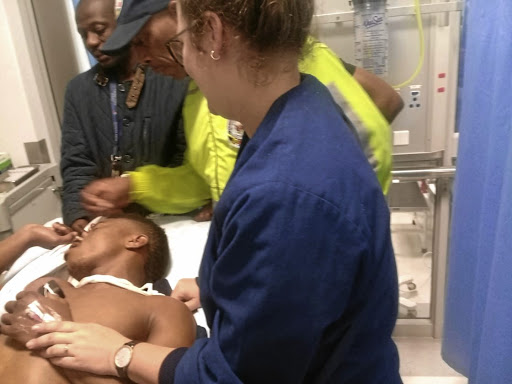 Xolani Mcotheli is being attended to at a hospital in East London after dislocating his shoulder in Sunday's fight.
Image: SUPPLIED

Xolani "Tiger" Mcotheli spoiled the party for trainer Damien Durandt, who was chasing South African boxing champion No 100 when his charge Marcus Lebogo challenged Mcotheli for the domestic junior-welterweight title on Sunday.

The champion from Mthatha, who is based in Mdantsane where his skills are honed by Ncedo Cecane, defeated Lebogo from Tembisa in Ekurhuleni on points at Mdantsane Indoor Centre.

A respected boxing trainer from East London who attended the fight bemoaned the fact that Lebogo could not take advantage of the fact that his opponent fought eight rounds with one hand.

Mcotheli's right shoulder was dislocated in round four and he fought the remaining eight rounds with one hand but was still able to defeat Lebogo and chalk up a second defence of the national title.

Durandt, whose father Nick died two years ago when he had produced 97 SA champions, has guided Athenkosi Dumezweni and Jackson Chauke to SA championships.

"We put pressure on Mcotheli, who held on for dear life and by right should have been docked a point by the referee for holding," said Durandt. "I knew that my man won the title and I am going to fight this decision with Boxing SA who must also reprimand fight supervisor and Boxing SA provincial manager [Phakamile Jacobs] for failing to abide by the rules.

"He made it clear in the rules meeting that if a boxer is injured the fight must be ruled a TKO. But he did not abide by the same rules."