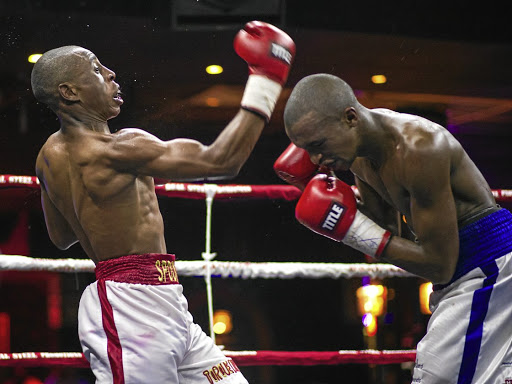 Sibusiso "Spook" Zingange reigned supreme as the WBA Pan African junior lightweight champion with an eighth-round stoppage of tough-as-nails Paul "The Wolfman" Mangxilana at Malamulele Boxing Gym of Eric Baloyi at the weekend.

The fight was organised by Tsatsa Promotion of Prenomen Chabane.

Zingange - under new trainer Harold Volbrecht - had not recorded a short route win since 2016.

Zingange has won back-to-back titles in his last two contests, picking up the ABU and WBA Pan African titles. The stoppage win was his fourth in 14 wins against three losses and two draws.

His stoppage of Mangxilana - the current Gauteng champion - came as a shock because Mangxilana is not a pushover.

Mangxilana's loss was second in succession, having lost to talented Jeff "911" Magagane in Randburg in July. Mangxilana has an unimpressive CV, which reads six wins, seven losses and five draws

The two boxers are coming off two and three consecutive losses, respectively. Maemu, now trained by Emmanuel Mutavhatsindi, lost to Russian Shakhatdzhon Rakhimov for the IBO junior lightweight belt in March and was also defeated by Ruslan Kamilov on points in July. Both fights took place in Russia.

On the other hand, Sibiya, who is trained by Bernie Pailman, lost to Ibrahim Mgender for the Global Boxing Council belt in Tanzania in 2017 and also lost twice to current SA champion Phila Mpontshana.