Vuyani 'The Beast' Bungu declines to take glory for US honour 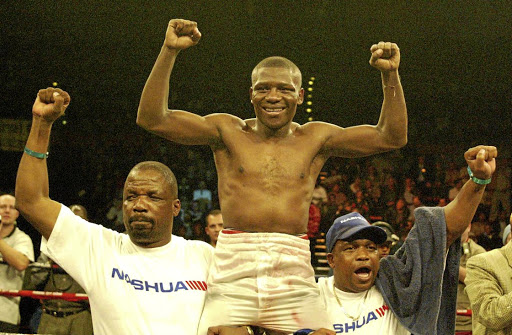 Vuyani Bungu is flanked by Mzimasi Mnguni and Champion Bakubaku in this file pic at Carnival City. /Raymond Preston

Accomplished retired world boxing champion Vuyani "The Beast" Bungu has modestly refused to take glory for his nomination to the International Hall of Fame.

The induction takes place annually in Canastota, New York, in the US. Next year's ceremony will be held in June.

Members of the Boxing Writers Association of America and international panel of boxing historians cast votes.

The 52-year-old Bungu remains the only local boxer to have defended his world title 13 times. He reigned supreme as the IBF junior featherweight champion from 1994 until 1999.

Bungu says his former promoter, Rodney Berman, told him about the nomination on Tuesday.

"I was excited," he said, adding that credit must go to Berman, trainer Mzimasi Mnguni, the media and all those people who used to attend his fights at the Carousel in Hammanskraal, where he dethroned American Kennedy McKinney on August 20 1994. "Rodney promoted me, Bra Mzi trained and managed me.

The Beast Bungu to get US honour

"Fans kept me going while the media's constructive criticism made me work even harder," said Bungu. "I played my part. Even up until today I still remain the only one with 13 defences of a world title."

Boxing South Africa CEO Tsholofelo Lejaka said: "We are elated to receive the news that Bungu has made the shortlist to consider for the Boxing Hall of Fame.

"This is not an easy milestone but a historical moment because we know the type of efforts, energy and footwork that has gone into ensuring that Vuyani makes it to the shortlist.

"We congratulate him; we know the process remains competitive and the fait accompli. We, however, remain confident because Vuyani's testimony speaks for itself; he has earned the credentials; has won heart and soul of boxing enthusiasts around the world.

"That on its own is a justification enough for us to believe that either in the coming year or next, Bungu will make it to the Hall of Fame."

Fight fans in Gauteng will be spoiled for choice during this weekend of boxing bonanza.
Sport
2 years ago

Simphiwe Konkco has been given the blessing by the World Boxing Council (WBC) to begin negotiating with reigning WBC mini flyweight king Wanheng ...
Sport
2 years ago
Next Article