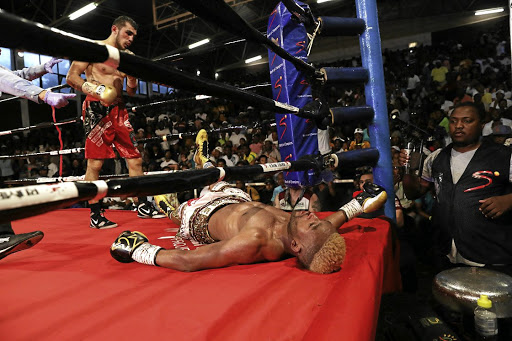 Azinga Fuzile was knocked out in the eighth round by Russian Shavkatdzhon Rakhimov at the Orient Theatre in East London on Sunday.
Image: ALAN EASON

Azinga "Golden Boy" Fuzile has promised to bounce back after suffering a devastating knockout in the eighth round to hard-hitting Shavkatdzhon Rakhimov at Orient Theatre in East London on Sunday.

The 25-year-old Russian, whose victory earned him the rights to challenge IBF junior lightweight champion Tevin Farmer, first dropped Fuzile with a big left to the jaw.

Local referee Deon Dwarte gave Fuzile enough time to recover and the boxer got up.

Sensing injury and an early afternoon, Rakhimov let go of a series of punches before an uppercut to the chin sent Fuzile down on his face.

"I mistimed the distance between us after throwing a punch and he countered with a left that dropped me."

Others say Nigel, 55, should not be fighting.
Sport
2 years ago

The loss was his first after 14 straight wins, while Rakhimov remained undefeated after 15.

Meanwhile, Boxing SA's 2018 Prospect of the Year Ayabonga Sonjica delivered to the promise he made a few weeks ago to win the SA featherweight boxing title from
Innocent Mantengu.

In another title fight, Ronald Malindi registered the second defence of the SA bantamweight with a points decision over Michael Daries.

The reigning champion from Limpopo is yet to taste defeat after 17 fights.