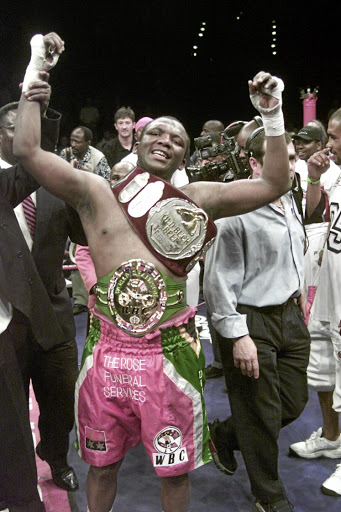 While top British boxing promoters Frank Warren and Eddie Hearn are against the return to the boxing ring of 55-year-old Nigel "Dark Destroyer" Benn, Dingaan "The Rose of Soweto" Thobela has backed the former two-weight world champion.

Benn last fought on November 9 1996 when he was beaten again by Steve Collins in a rematch.

Benn, whose reign as the WBC super middleweight champion was cut short by Thulani "Sugar Boy" Malinga on March 2 in 1996, will fight Australia-based Cameroonian Sakio "Scorpion" Bika in Birmingham, England on November 23.

Benn's fight with Bika has been sanctioned by the British and Irish Boxing Authority (Biba) after the British Boxing Board of Control informed Benn that there was virtually no chance of him getting his licence back.

"Benn may be back in the gym and he might feel good, but a fight is a whole different thing. A 55-year-old should not be boxing. Anyone around him who cares about him shouldn't be letting this go ahead," said Warren.

Hearn said: "If it's Sakio Bika, I don't like that fight. He is still a right handful, he's strong, he can punch. He's horrible with his head, he's dirty."

Andre Thysse, who fought and lost to Bika for the IBF Australasian super middleweight title in 2007 said: "Put it this way, George Foreman put us in this situation when he came back to win a WBA world heavyweight title when he was 45 years old. Now how do you stop Benn? But one thing I can tell you; Sakio is very strong."

Thobela, who turned 53 last week, is in Benn's corner on this one. "If Nigel feels he can still do it then why not for as long as he passes all the medical check-ups that are done to all the boxers," said Thobela.

The former WBO and WBA lightweight champion who went on to win the WBC super middleweight belt said: "There are contributing factors that force him to come back such as love of boxing, money and probably boredom."

Boxers in SA who are over the age of 35, are allowed to apply for a licence renewal, but need to remain active at least once for each 12-month period throughout the remainder of their careers.