Boxing fans in for a lovely treat this weekend 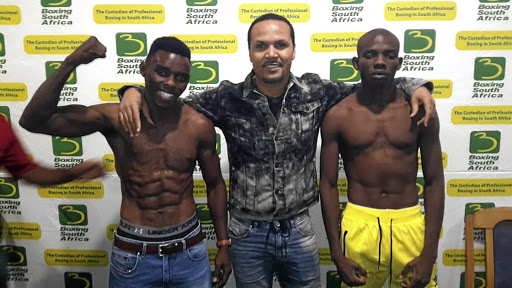 Fight fans in East London are in for a treat with two super tournaments taking place
tomorrow and Sunday.

The province's top promoters Ayanda Matiti and Thembalethu Ntuthu will deliver the two tournaments at the ICC Hotel and Orient Theatre.

In Johannesburg, siblings, Elias and Fanakhe Tshabalala will provide action at the
Portuguese Hall in Gauteng where East London's darling Xolisani "Nomeva" Ndongeni will feature in an international bout that will form part of the Fantastic 2 Promotions card.

The former IBO and WBF lightweight champion from Duncan Village, who is trained in Joburg by Seam Smith, is known for his charisma that draws capacity crowds inside the Orient Theatre.

Brothers and boxing promoters - Fanakhe and Elias Tshabalala - continue in their ambition to change boxers' lives financially and assisting in making ...
Sport
2 years ago

The tournament will be headlined by the WBF lightweight championship bout between SA champion Ayanda "Greyhound" Nkosi against Mexican Emmanuel Lopez who will be in action on Sunday against Azinga Fuzile.

In another title fight, Phumelele Cafu from Mdantsane will take on Tanzanian Hamza Mchanjo for the WBC International mini flyweight title, with Luyanda Nogogo making his debut for Fantastic 2 Promotions bill.

The East Londoner will take on Junior Makondo while Wade Groth and Fernando Rodriqguez will feature in the bill. Action will begin at 7pm.

Ndongeni's former promoter Matiti will organise the "Battle of Strawweights" at East London's ICC Hotel. SA strawweight champ Xolisa Magusha will defend against Bandla. Ayanda Ndulani and Loyiso Ngantweni will meet for the ABU strawweight vacant belt. On Sunday, Fuzile will take a giant leap when he contests for the IBF junior lightweight No1 ranking against Rakhimov at Orient Theatre.

Fox Sports Africa is putting the spotlight on local boxers