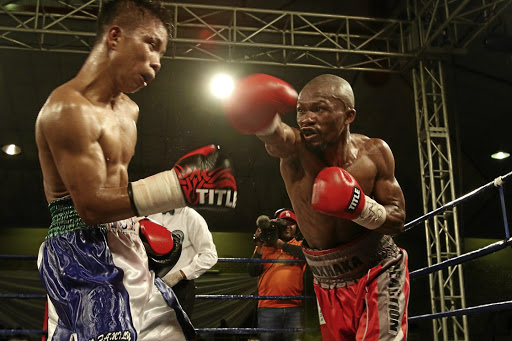 It will take place in the champion's backyard of Thailand, Konkco's trainer Colin Nathan confirmed yesterday.

"Yes, we will face the champion in his backyard on October 25," said Nathan.

It's been eight years since a local boxer fought for the WBC belt and that was when Gideon Buthelezi failed to dethrone junior-flyweight champion Adrian Hernandez in Mexico on September 24 2011.

But it has been 18 years since Dingaan Thobela won the super-middleweight belt from Briton Glen Catley in Brakpan in 2000.

Menayothin, 33, has defended his belt 11 times and remains undefeated after 53 fights.

Konkco also set for the same belt
Sport
2 years ago

He has eclipsed the undefeated fight record of American multiple weight world champion Floyd Mayweather Junior, who was unbeaten in 50 fights before retiring.

Nathan continued: "We are going into a lion's den against one of the most prolific boxing champions. Obviously we are going in there as underdogs.

"I relish these moments when we are underdogs. We are very upbeat and confident that we can pull [off] this upset."

Konkco, who is based in Johannesburg and is originally from Ngangelizwe in Mthatha, is the IBO champion. The 33-year-old has already started preparing for the fight that will decide his future in boxing. Some of his sparring partners include IBF flyweight holder Moruti Mthalane.

"I want to use Moruti a lot for his style of fighting," said Nathan.

His other two boxers, Azinga Fuzile and Khanyile Bulana, will be involved in big fights at Orient Theatre on September 29. Fuzile takes on Russian Shavkatdzhon Rakhimov for the No 1 spot in the IBF junior-lightweight division. Khanyile will face SA junior-lightweight champion Phila Mpontshane for the vacant IBF Africa title.

Simphiwe Konkco has been given the blessing by the World Boxing Council (WBC) to begin negotiating with reigning WBC mini flyweight king Wanheng ...
Sport
3 years ago

President has jab at glut of current 'world' titles.
Sport
3 years ago
Next Article