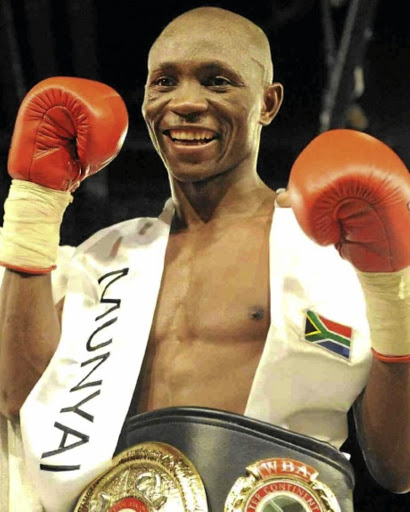 It has turned out that Tshifhiwa Munyai, pictured, nagged promoter Elias Tshabalala for a fight against Xolisani Ndongeni.

So desperate Munyai was that he was willing to take anything for as long as he featured in Fantastic 2 Promotions of Elias and his younger brother, Fanakhe.

The tournament will take place at the Portuguese Hall, south of Johannesburg, on September 28.

"Ndongeni was not interested in fighting Munyai," explained Elias.

"But he eventually backed down after I explained to him that he would then miss participation on the September 28 bill and wait for December."

Ndongeni then agreed and happily signed the contract. Munyai has now changed the storyline by saying he would never face Ndongeni for an eight-rounder, but a title fight.

Apparently the Tshabalala brothers had offered Munyai R40,000 for eight rounds, which is very a good purse money by South African standards.

The only time boxers in this country got paid such purses was during the Premier Boxing League of Dicksy Ngqula who paid each fighter R60,000 for a six-rounder.

Elias is now hopping mad and said he wants nothing to do with Munyai.

Boxer pulls out of Ndongeni duel
Sport
2 years ago

"He came begging us for a fight and we accommodated him for a nontitle fight, but now he changes the story. He is scared of Ndongeni - that's all," said Tshabalala, who confirmed that matchmaker Abbey Mnisi has since found a replacement who will meet Ndongeni.

Munyai's trainer Allan Toweel Jr said he asked his charge if should it not be a purse money more than R40,000, he shouldn't take it because this is bigger fight and he agreed.