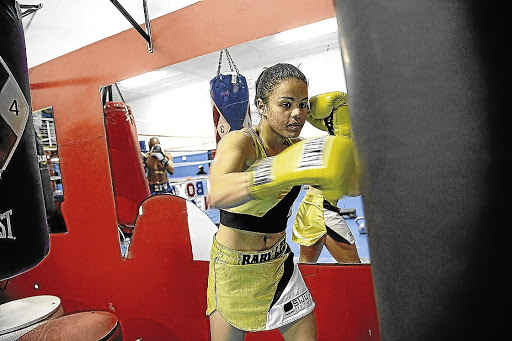 The late Leighandre 'Baby Lee' Jegels used to work out in her Down Town Boxing gym.
Image: MARK ANDREWS/DISPATCH

What began as a mistaken hit was quickly confirmed as nothing but the truth that the the 24-year-old bright student of the fight game was allegedly shot and killed by her boyfriend last week.

Jegels was seen as the reincarnation of the late Jacob "Baby Jake" Matlala. She was a professional female boxer from East London in the Eastern Cape.

The report stated that Jegels' mother was also shot, but survived and was admitted to a hospital in East London.

An anonymous source also alleged that the boyfriend was abusive, and that the former SA bantamweight prospect whose hand speed and relentless attack was similar to that of the late Matlala, already had a restraining order against him.

It is probably due to the Matlala's attributes that her close friend and manager, Andile Sdinile, gave her the nickname "Baby Lee". Sdinile once took her with Xolisani Ndongeni to the US where they rubbed shoulders with many top American fighters at the state-of-the-art Mayweather gym owned by the flamboyant retired world champion, Floyd Mayweather Junior.

"What is more sad is the manner in which she lost her life, more especially at a time when the nation was celebrating the Women's Month month of August," said BSA CEO Tsholofelo Lekaja in a statement signed by chairman Peter Ngatane.

Chairman of the Eastern Cape Boxing Promoters Association, Tando Zonke, described Jegels as a national treasure and a woman of many talents.

She was enterprising, and held a belt in karate, and was a qualified teacher.

"Her departure is a huge loss as she has been one of the best female boxers in the country," he said in a statement.

"Some boxing people came to us and asked when we would face each other, and we just laughed," she said.

"She told me she had not fought because on an injury, but was coming back. I vacated the WBF belt because I made it clear that I was making way for younger boxers like her.

"I will dedicate my upcoming fight this month to her. Wearing a shirt that will bear her face will be a crowning moment for me," said Nonina.