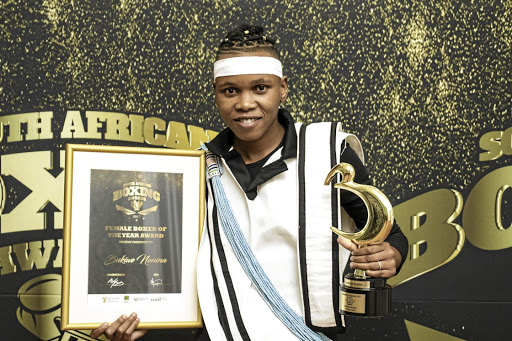 One of South Africa's accomplished female boxers, Bukiwe "Anaconda" Nonina, has finally decided to relinquish the WBF bantamweight belt she has held since 2017.

This was confirmed by her manager Makhosi Ngcoza yesterday. The man who has done wonders in profiling the former undefeated SA champion made it clear that fights were scarce for Nonina, who has defended her belt only two times since winning it.

The 2016 and 2017 Female Boxer of the Year was supposed to put her belt on the line at Sterkspruit in the Eastern Cape tomorrow against French foe Mahira Hamzaoui. But that fight is off because the promoter failed to meet Boxing South Africa's requirements on time.

"It was our plan to vacate the belt after our fight on Saturday," said Ngcoza, adding that Nonina will be involved in a fight on September 28 that could be preparation for an IBF title fight that could take place in December.

Nonina won the WBF strap against vastly experienced Alesia Graf from Germany. She defended it against Matshidiso Mokebisi from the Free State and Malawian Ellen Simwaka.

These are good and quality opponents in their own right, especially Mokebisi, but Nonina's victories against them did nothing to her in terms of helping her grow as a fighter.