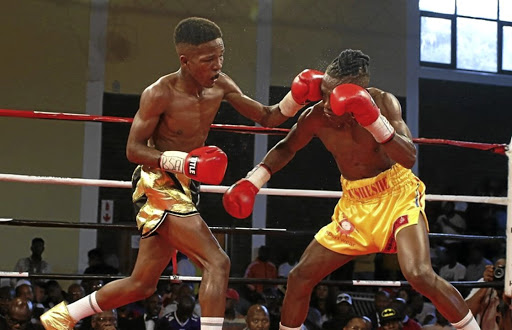 Siyakholwa Khuse, left, is to face a rematch for the SA mini flyweight bout after after judges initially said he lost the fight to Xolisa Magusha on July 28.
Image: Christo Smith/ Picasa

The verdict is out - Siyakholwa Khuse defeated Xolisa Magusha via a split points decision to win SA mini flyweight title.

This is the outcome of the review by three independent judges that were appointed last week by Boxing South Africa (BSA) after Khuse's lawyer, advocate Mava Malla, had lodged a formal complaint on behalf of the 19-year-old boxer whose attempt to dethrone Magusha was shattered by the judges in their fight at Orient Theatre on July 28.

Malla - a former CEO of the now defunct SA National Boxing Control Commission - had requested Boxing South Africa to reverse the decision in favour of Khuse.

But CEO Tsholofelo Lejaka, who accepted the submission to formally appeal the decision, explained that reversing the decision was not an option.

"Fortunately, this was a televised fight, so reliable footage is available for review.

"Boxing SA will therefore constitute an independent panel of judges to review the fight," he said at the time.

But Lejaka made it clear in his response that should the review outcome be different, Boxing SA will order a rematch of this fight.

Trainer Luyanda Sovasi said: "We are happy with the verdict which proves what we have always maintained.

"Hopefully, the loss in my boxer's record will also be removed. The promoter, Thembalethu Ntuthu, is dealing with the legalities regarding the rematch."

Malla, who was groomed by veteran trainer Lennox "Boy Boy" Mpulampula, said he believed that the outcome of the review should be used as an eye-opener and BSA should take action against officials who worked on the fight.

"They should be suspended for three months," he said. "We cannot have people doing as they please with the people's sport."

Malla even suggested the grading system for officials - something, he said, used to happen when the likes of Stan Christodoulou and late Les Muller were still involved in the administration of boxing.