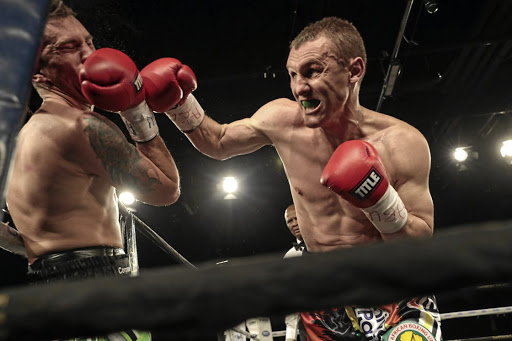 Neither a win or loss against Nick Hannig for the WBC International title in Germany will stop Ryno "The Lion" Liebenberg in his pursuit for a showdown with Rowan Campbell, a shoot-out Liebenberg says will indicate the best super middleweight in SA.

Campbell is the national and IBO Africa super middleweight champion. He upset the bookies when he pummelled hot favourite Patrick Mukala of Congo into submission in seven rounds at the weekend.

Liebenberg faces Hannig in a rematch in Germany in October.

They drew in their first fight for the same title in July.

"Win or lose, I want to fight Rowan," said Liebenberg yesterday. "His stunning seventh round knockout of Patrick on Friday sets up a fight between ourselves to decide the best super middleweight in the country now."

Liebenberg had predicted a KO loss for Campbell to hard-hitting Mukala who has destroyed 10 boxers in his 11 wins. "I like to think that I hit harder than Rowan. I hit Patrick with bombs but I could not stop him but Rowan stopped him beautifully... I want to fight Rowan before I retire."