No IBO belt for ' Razor' yet as Olvera withdraws 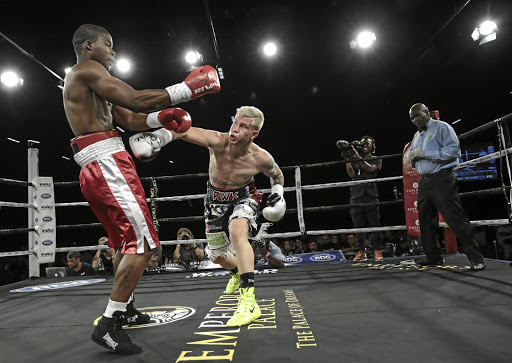 That is how 21-year-old boxing rookie Roarke "Razor" Knapp must welcome the latest news in his young career which was to be adorned by the IBO Youth belt he was to fight for against Mexican Ernesto Olvera, 23, at Emperors Palace on August 23.

"Macho", as Olvera is nicknamed, will no longer be part of Golden Gloves "Razor Sharp" bill.

Instead, Aleksandr Zhuravskiy from Ukraine is the man to face Knapp.

The 34-year-old Ukrainian is no stranger to the local boxing ring. He drew with Boyd Allen in a Golden Gloves tournament at Emperors Palace on June 8.

Zhuravskiy has 13 wins, with 11 knockouts, against five losses and a draw. Golden Gloves' fight coordinator Jeff Ellis confirmed yesterday that Knapp, who remains undefeated after nine fights with seven knockouts in eight wins and a draw, will now welcome the Ukrainian in a non-title 10-rounder in the junior middleweight division.

"We had the IBO Youth belt sent to us; we had the opponent from Mexico and everything was in order until the same Mexican could not get his visa," said Ellis. "Everything had already been approved."

Ellis said his boss and promoter Rodney Berman moved swiftly and got Zhuravskiy.

"Roarke will get his chance for the youth title. Look, it is still a good fight, Roarke is fighting a quality opponent.

"Luckily local fans saw him against Boyd Allen, so you know what I am talking about."

Topping that bill will be Rowan Campbell in the defence of his IBO Africa super middleweight belt against hard-hitting Patrick "Hammer" Mukala, the Congolese whose career is guided here in SA by trainer Ashley Fourie.

Mukala's only loss was to Ryno Liebenberg in 2017.

Mukala has 10 knockouts in 11 wins against a loss while Campbell, the domestic champion who is trained by Peter Smith, remains undefeated after 10 fights with six knockouts.