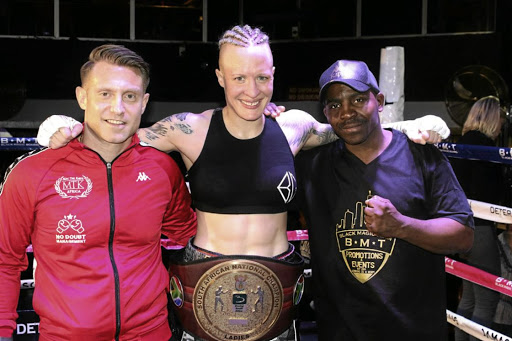 Two well-aimed body shots ended the fight at the weekend. Ndyambo, who was involved in her 11th professional bout, retired on the stool going for the second round.

Wolmarans, known as "The Shredder", from Auckland Park in Johannesburg, became the first female boxing champion from the HotBox Gym of trainer Colin
"Nomakanjani" Nathan, who is assisted by Vusi Mtolo.

"I trained hard for 10 rounds but it is what it is," said Wolmarans, a personal strength trainer, who improved to three KOs in five wins. Nathan said he was reluctant to train a woman boxer. "But when Hedda joined me I made a promise that I will make her a champion and that promise has been fulfilled. There are bigger things in store," he said.

The fight headlined the eight-bout extravaganza by female promoter Thembekile Klaas of BMT promotions to celebrate Women's Month. The tournament was dubbed "Power to Women".

A non-title contest between Bonita van Jaarsveldt and Raider Muleba went the full six rounds and resulted in a draw. Trainer Gert Strydom was livid because he felt Van Jaarsveldt did enough to win. One judge scored 58-56 for Muleba while the other voted scored it 59-55 for Van Jaarsveldt. The third judge's card which was the decider was level at 57-57.

The fight of the afternoon was a mini flyweight contest between Sabelo Nkosi and George Kandelo. Nkosi is from the Westside Boxing Academy of Bernie Pailman while Kandelo is trained by George Khosi in Hillbrow. The two fighters had impressive skills and crisp punches. Nkosi was declared a winner by unanimous points after six rounds.