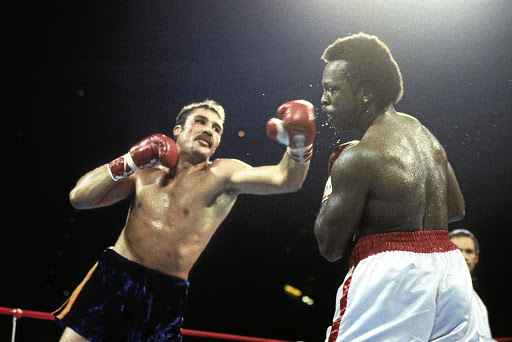 Gerrie Coetzee throws a left jab at Michael Dokes at Richfield Coliseum, US, in 1983. /Getty Images

This year marks 36 years since Gerrie the "Boksburg Bomber" Coetzee won the World Boxing Association heavyweight boxing title with a 10th-round knockout of defending champion Michael Dokes at Richfield Coliseum, Ohio in the US, on September 23 1983.

Coetzee had twice failed to win the belt that had been vacated by Muhammad Ali.

He lost to "Big" John Tate over 15 rounds at Loftus Versveld Stadium in Pretoria on October 20 1979.

The former domestic champion also lost to Mike Weaver at Sun City in the North West on October 25 1980.

Coetzee's victory against Dokes made him the first boxer from the African continent to fight for, and win, a world heavyweight championship.

Coetzee later lost his title to Greg Page, who knocked him out in round eight at the same Sun City in December 1984.

After one victory against James Tillis, Coetzee met Frank Bruno in England and the big-punching Brit knocked Coetzee out in round one on March 4 1986.

Coetzee retired but bounced back to win three fights before being stopped by Iran Barkley, a former WBC and IBF super- middleweight and WBA light- heavyweight champion, in the 10th round in Los Angeles on June 8 1987.

The proud South African retired for good with an impressive record of 36 wins, 21 KOs, six defeats and a draw with American Pinklon Thomas on January 22 1983.

Thomas, the former WBC champion, was the first to win an IBO heavyweight belt.

No local boxer has ever won the WBA heavyweight belt.

Coetzee, whose career was guided by promoter Thinus Strydom, was presented with the Lifetime Achievement Award in California two years ago by the Hollywood and African Prestigious Awards.

South Africa has a proud history on the world boxing stage.
Sport
2 years ago

How 'Terror' scored a KO for black boxing