'It's not all doom and gloom in Hillbrow' - Boxing trainer Khosi 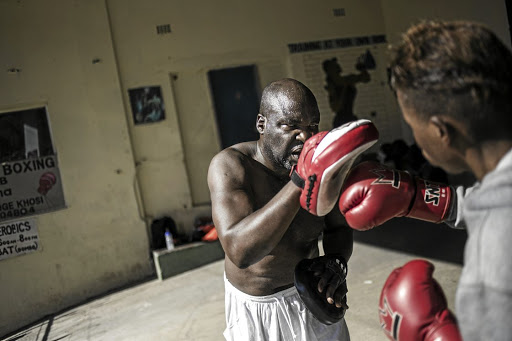 George Khosi on a mission to prove he's one of the best trainers.
Image: JOHN WESSELS

Hillbrow, an inner city neighbourhood in Johannesburg, is known for its high population, unemployment, prostitution and crime.

But boxing trainer George Khosi who has a gym in the heart of the place, is out to prove that not all is doom and gloom in Hillbrow.

The 49-year-old former amateur boxer from Limpopo, who has lived his whole life in Hillbrow, said his neighbourhood will produce a world champion in Simon "Destroyer" Dladla sooner than one can imagine. The unknown boxer from QwaQwa in Free State is also based in Hillbrow.

He stunned a big crowd at Kagiso Recreation Centre two weekends ago when he defeated Linda Ntshingila for the Gauteng junior middleweight title. Many thought Dladla did not stand a chance against Ntshingila, the powerhouse trained by Pius Dipheko. Ntshingila was also buoyed by the spirited performance he gave against Brandon Thysse at the same venue in Kagiso, West Rand, in March.

Thysse is a polished boxer whose ability once earned him a nomination for the 2017
Boxing SA Prospect of the Year award, which was won by Azinga Fuzile.

Even when Thysse lost to Nkululeko Mhlongo, reigning SA junior middleweight champion, he had shown the heart of a lion.

Thysse, now trained by Damien Durandt, was just unlucky against Ntshingila in their provincial title fight which was declared a draw.

Ntshingila gave a very good account of himself in that fight which was his first 10-rounder, and it was based on his conduct against Thysse that Dladla was seen as a sheep that was brought to be slaughtered.

But Dladla used the opportunity, in only his fourth fight, to launch his career.

Khosi said he is inundated with calls from promoters seeking Dladla's signature.

"You cannot keep a good man down. I have uncovered a number of boxers, including
Osborne Machimana (former SA heavyweight champ) and they all got taken away from me probably because some people believe that I don't deserve to have such boxers," said Khosi.

"I did not give up because boxing is my life; I started [with] Simon from nowhere and gave him 15 wins in the amateurs and now he is the provincial champion from that same gym in Hillbrow.

"I am out to prove to a lot of people that Hillbrow, like any other part of Johannesburg, is able to produce positive things since it is known for drugs and crime."

He said: "I am telling you now that Dladla signed this weekend to defend against Thysse.

"What you saw in Kagiso was just nothing compared to what we will do to Thysse on August 11."

Khosi's amateur career was cut short some 30 years after an attack in Hillbrow. Three bullets hit his leg with one grazing his right eye. He said he was left for dead. Years later he started honing the skills of children and adults.

"I also want to prove once again that I am one of the best trainers," he said.

"After dealing with Thysse, we will be ready to take on Mhlongo. We are not scared of him. We are gunning for a world title; the SA title will be our passport.

"Hillbrow will have a world champion sooner than you can imagine," said Khosi.