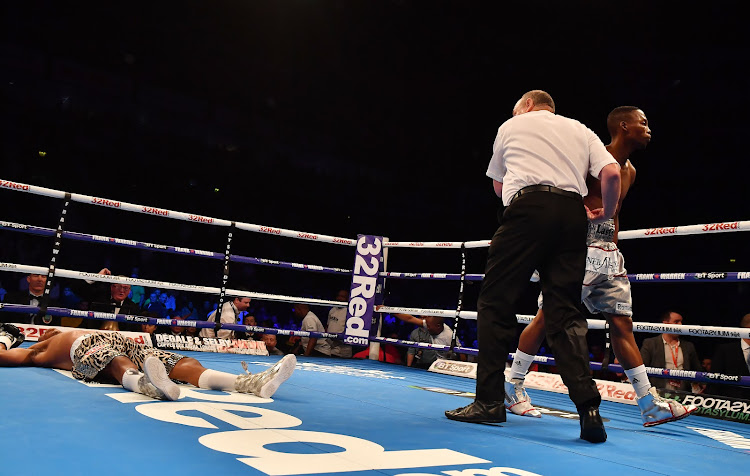 Siboniso Gonya is knocked out by Zolani Tete with his first punch after only a few seconds during their WBO Bantamweight Championship.
Image: Charles McQuillan/Getty Images

Siboniso “Tiger” Gonya summed it all up nicely when he explained how he felt after being shown the stars by Zolani “Last Born” Tete in their WBO bantamweight championship in Belfast‚ Northern Ireland‚ in November 2017.

“It’s is very difficult for me to explain this but I didn’t see the fight‚” he said of the historic bout that ended in 11 seconds.

“The one thing I remember is being inside the ring‚ the bell ringing for us to meet in the middle of the ring. I then saw people around me and I asked my coach [Zwi Magudulela] and he also said he saw nothing.

“He said to me [that] Zolani told him that I missed with a jab and he countered with a right hook. It happened too quick.”

That knockout is the fastest in a world championship bout. It eclipsed the record held by WBO junior featherweight champion Daniel Jimenez who stopped Harald Geier in 17 seconds in 1994.

It did qualify for the 2018 awards‚ and won at the ceremony in Sandton on Friday night.

The other knockouts shortlisted were the vicious second round of Akani Phuzi on Chris Thompson and the fourth round of Michael Mokoena on Lusanda Komanisi.

Tete said: “The record it holds speaks volumes not only for me but for the whole country.

“I just hope Gonya is not offended when people talk about as if the intention is inflict more pain on him or embarrass him.”

Getting clipped directly on the chin rattles brains.

A quick flash of darkness envelops the senses as the body shuts itself down and does a quick reboot.

No sooner than the flash happens‚ sight returns as if no time has passed at all and nothing has even occurred.

You’re out. You get hit‚ and you are gone. Your body shuts itself down when experiencing trauma to protect itself and the internal workings of your human organs.

It then restarts itself and brings your operating system back online.

The danger in your body thinking it should “die” to protect itself‚ is that the possibility is always present that you could never wake up.

While you are out‚ it is akin to being asleep. The sleep is so deep that it makes it impossible to actually know how long you have been out. The knockout‚ as enthralling as it is brutal‚ has been and will continue to be exciting.

Tete added that he would bounce back stronger than ever following the injury that forced him out of the bantamweight World Boxing Super Series where he was to unify with WBA Super holder Nonito Donaire.

Tete was replaced by Stephon Young who was knocked out in the sixth round by the Filipino‚ who will face the winner between IBF champion Emmanuel Rodriguez and WBA champ Naoya Inoue whose semifinal will take place in Glasgow‚ Scotland this weekend.

“I will come back from the injury that ruled me out of the World Boxing Super Series. Nothing is lost‚” said Tete from Mdantsane.

“There is still ample time for me to win those world titles – IBF‚ WBA Super and WBA – that are part of the WBSS.”