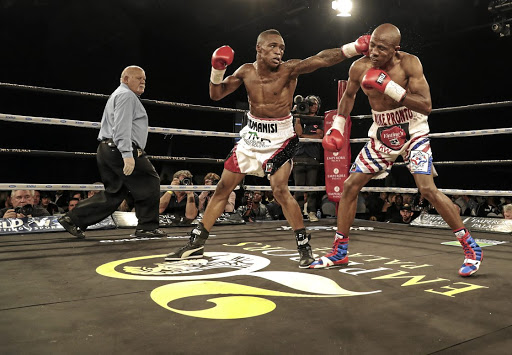 Michael Mokoena takes some punches from Lusanda Komanisi before knocking him out last year. / Nick Lourens

Boxing trainer Sebastiaan Rothmann says he has utmost respect for Michael Mokoena, who upset the bookies twice - last year and this year - by ending the career of Lusanda Komanisi and stopping Thompson Mokwana within the distance.

Komanisi, a former IBO featherweight champion, was upset by unheralded Mokoena via a second-round knockout last year and announced his retirement.

Mokoena later stopped Mokwana in six rounds in March. Mokwana was lucky that the SA lightweight title he holds was not on the line.

But Rothmann said the respect and good run Mokoena has had means nothing to his hot prospect Jabulani Makhense - who is WBA Pan African junior-welterweight champ.

The two will meet at Emperors Palace on June 8.

Trainer feels boxer has served his internship
Sport
3 years ago

Makhense, 23, remains undefeated after seven fights and is nominated for Boxing South Africa's prospect of the year award.

Rothmann, a former SA, WBU and IBO cruiserweight champion, said: "Michael is a very humble and intelligent boxer and I respect him.

"He is coming up to our weight division and I wonder if he would be strong enough against us.

"This fight is about Jabu to prove to people that he is a talented boxer and probably the best junior-welterweight in the country. This could be a career-defining fight for Jabu."

The fight is the main supporting bout for the IBO cruiserweight championship between holder Kevin "Two Guns" Lerena and Vasil Ducar from the Czech Republic.

Allen will take on Alexandr Zhuravsky from Kazakhstan over eight rounds.

IBO world champions Kevin Lerena and Tulani Mbenge go up against each other in the battle for South Africa’s Boxer of the Year award for 2018.
Sport
3 years ago
Next Article