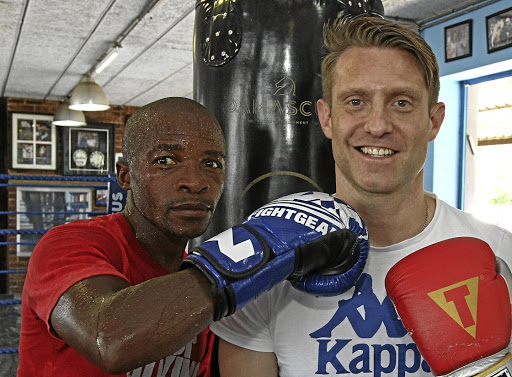 Moruti Mthalane and trainer Colin Nathan are in Japan for Mathalane's title defence against Mayasuki Kuroda on May 13.
Image: Thapelo Morebudi/Sunday Times

While Moruti "Baby Face" Mthalane's achievements have been outstanding, his trainer Colin "Nomakanjani" Nathan believes there is so much more to come now that Mthalane has joined MTK Global, world's foremost boxer management company.

MTK Global president Bob Yalen welcomed Nathan on board as the head of MTK Africa in January.

The announcement that Mthalane had teamed up with MTK Global, which manages more than 150 boxers around the globe, was made yesterday.

"This is another landmark deal and we're so proud to welcome one of the all-time great South African fighters to MTK Africa," said Nathan from Japan where Mthalane will bid for the second defence of his IBF flyweight strap against Mayasuki Kuroda on Monday.

"The help and backing of MTK Global ensures all his efforts will be channelled correctly.

"Myself and Moruti are delighted to be working with the best management company in the world and look forward to more success. Unification fights are inevitable and this brings them closer."

Mthalane said: "Since I have joined Colin, my career and life have changed for the better. When I heard Colin was becoming head of MTK Africa, it was a natural move for me to sign for them because they are by far the best management company in the world.

"I have reclaimed the IBF title I never lost in the ring and now I'm looking forward to great things with my new company."

Mthalane, Nathan and cut man Bernie Pailman have been in Japan since Monday.

When Mthalane won the IBF belt, he reclaimed the title he vacated in 2014 because he was unhappy about the purse money he was to earn for his fifth defence against Amant Ruenroeng in Thailand.

Mthalane then spent two years without action, and Tshele Kometsi came to his rescue as the IBO was about to relieve him of its belt. The promoter, who trades under TK Promotions, staged Mthalane's defence against Genesis Libranza and organised the IBF International championship fight in a short space of time.

During that time Mthalane had joined Nathan, whose connections abroad convinced the IBF championship committee to approve Mthalane to feature in an elimination bout.