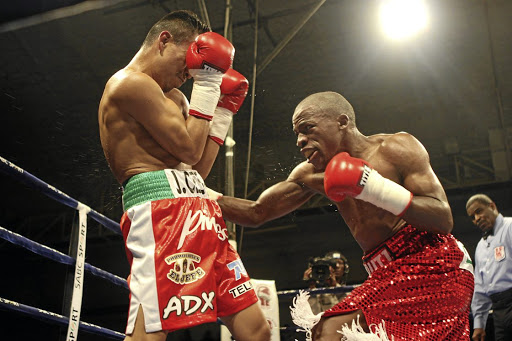 Moruti Mthalane on his way to become IBF flyweight champion when he outpointed Julio Miranda from Mexico in 2009.
Image: BAFANA MAHLANGU

IBF flyweight boxing champ Moruti "Baby Face" Mthalane is ready to fly out to Japan on Sunday after he performed a cultural ritual to communicate with his ancestors.

"I am a typical Zulu who believes in culture. So I went home to visit my mother and I burnt impepho [incest] which is my way of communicating with amadlozi [ancestors]," Mthalane told Sowetan.

"I cannot travel abroad when I had not seen my mother. That helps me draw luck and inspiration. I also communicate with my late father emsamo [a special and sacred place inside a traditional Zulu hut] because I believe my father is there, and that belief works for me."

Mthalane's father died when he was seven-years-old.

"I was brought up by my uncle who introduced me to boxing. My mother also played a pivotal role in bringing me up," he said, noting that a week in Japan will be enough to acclimatise.

Mthalane is from Lindelani, in Durban, but is based in Johannesburg where his fruitful career is guided by successful trainer Colin Nathan.

His career began under the late Nick Durandt with whom he spent 12 years. Mthalane won the SA, IBF and IBO flyweight belts under that prolific swearer yet prosperous trainer. They parted ways in 2016 when Durandt retired as a trainer.

The boxer then teamed up with Nathan who helped him reclaim the IBF strap which Mthalane vacated in 2014 due to a paltry purse he was to earn in his fifth defence against Amnat Ruenroeng in Bangkok, Thailand.

Mthalane will bid for the second defence of the IBF strap he won in Malaysia in June last year. He registered the first defence with a 10th-round stoppage of Masahiro Sakamoto in Macao in December last year.

The champion boasts 25 knockouts in 37 wins against two losses, one to Nkqubela Gwazela in 2004 and the other to Nonito Donaire of the Philippines in 2008 in Las Vegas.

Mthalane, whose marauding style of fighting does not allow opponents to get into their own stride, will face 32-year-old Kuroda, who is rated fourth by the IBF in the flyweight class.

Kuroda has left 16 of his 30 victims gasping for air. He was in turn stopped once in seven losses against three draws.

Meanwhile, WBA Super bantamweight champion Donaire, who was to defend against WBO titlist Zolani Tete, progressed to the final of the World Boxing Super Series after knocking out Stephon Young in the sixth round on Sunday morning (SA time).

Donaire will face the triumphant of the second semifinal between WBA "regional" champion Naoya Inoue and IBF titlist Emmanuel Rodriguez who will fight on May 18.