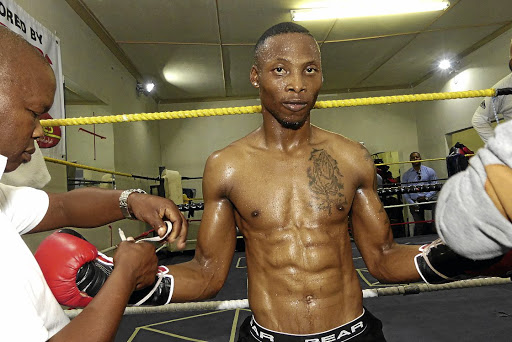 Zolani Tete in training in Mdantsane, Eastern Cape, while preparing for a World Boxing Super Series fight against Nonito Donaire. The bout was set to take place on April 27 in the US.
Image: MARK ANDREWS

Little-known American Stephon Young has been officially announced as the new opponent for WBA Super bantamweight holder Nonito "The Filipino Flash" Donaire in pursuit of a final slot in the bantamweight World Boxing Super Series (WBSS).

The fight - the official semi-final of the bantamweight WBSS - will take place at the Cajundome, where Young was to face Daniel Lozano in the under-card bout on Sunday morning (SA time).

"Young will now have the golden opportunity to earn a place in the final against either WBA regional holder Naoya Inoue or IBF titlist Emmanuel Rodriguez, who will oppose each other in the second semi-final on May 18," said chief boxing officer Kalle Sauerland.

This 11th-hour change was caused by an injury to the shoulder of WBO holder Zolani "Last Born" Tete, who was to meet Donaire in the unification bout.

Zolani "Last Born" Tete has pulled out of the bantamweight World Boxing Super Series due to a shoulder injury‚ his manager Mlandeli Tengimfene ...
Sport
3 years ago

Sauerland added: "It is very unfortunate for Tete, particularly after such a strong belief in going all the way and win Muhammad Ali trophy. Fortunately, we are prepared for such eventualities and the tournament will move forward with our reserve fighter Stephon Young, ranked No 5 in the world, facing Donaire in the semifinal."

Tete - who rounded up his preparations under American trainer Floyd Mayweather Snr in Las Vegas - is quoted as saying: "It is very sad and disappointing for myself and my team that we have to pull out of the fight this Saturday. We were looking forward to the fight, but to fight such an incredible opponent like Nonito Donaire you need to be 100% fit.

"I hurt myself on my right shoulder on Monday when I was doing pads in the evening. I told my team there is something funny in my shoulder, but that it was nothing serious. The following day I was doing a light session, but I could feel this thing and when I went to bed I couldn't sleep properly.

"We went to the doctor who discovered tendonitis in my shoulder and he could see it was inflamed. I got some treatment, but the shoulder was still painful. I've been trying my best since yesterday to recover but I couldn't, so we had to take that hard decision."