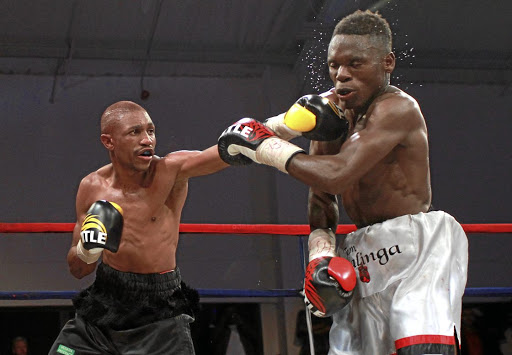 Thato Bonokwane, left, will face Samuel Esau from Western Cape in an eight-rounder in Kagiso on Saturday. Bonokwane is seen here pummeling Bongani Bhuti in a previous bout. / Christo Smith

Boxing SA's board has shown recklessness in handling matters contradicting the SA Boxing Act and thus putting efficient administration of professional boxing in the republic in jeopardy.

Forty-eight hours have gone by and no statement has been issued by BSA to condemn the flagrant disregard of the very act last weekend.

In terms of the Boxing Act 2001 (Act No. 11 of 2001), in a championship fight for a vacant title, if a bout ends in a draw, each judge shall nominate a winner and the winner of the bout shall be the boxer nominated as the winner by the majority vote of the judges.

Boxing South Africa (BSA) may have to bob and weave its way to safety in the courtroom.
Sport
2 years ago

That means BSA Gauteng manager Archie Nyingwa - who was fight supervisor - should have given the scorecards back to all the judges to nominate the winner.

Either Thato Bonokoane or Innocent Mantengu was denied a golden opportunity to become his country's pride.

BSA has the tendency of burying its head in the sand like an ostrich when faced by a storm, hoping it will just pass.

The same thing happened last year when COO Cindy Nkomo was overruled after cancelling a tournament because of noncompliance.

Locals warming up to national belts

Belief in prestige of SA championship returns
Sport
2 years ago

It was after the media had a field day on the matter that BSA reacted. That bout between Bonokoane and Mantengu was sanctioned on the proviso that the winner must defend against Ayabonga Sonjica.

But BSA must now order a rematch between the two fight and it must go on purse bids and be staged in 90 days.

The first option would have been for BSA to appoint neutral judges to review the fight.

But BSA cannot be trusted because it once appointed judges from Gauteng to review the taped fight between Johannesburg-based Koos Sibiya and Phila Mpontshana from Mdantsane which was marred by controversy.