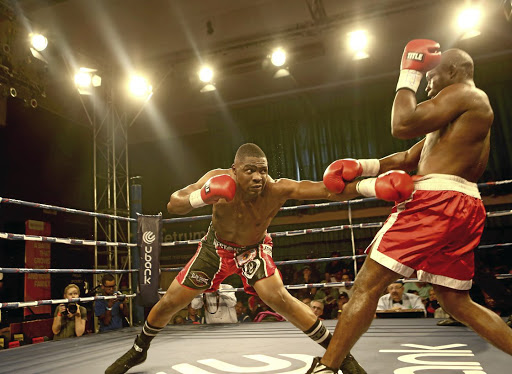 Toweel reiterated yesterday that he will never allow his rising prospect to fight "The Rock". Phuzi is rated No2 for Mchunu's belt, while Thomas Oosthuizen is rated No1 but does not qualify to challenge, especially after his points' loss to Aleksei Egorov in Russia last week.

Mchunu is due to make a mandatory defence, but with Toweel's firm stance, that simply means Phuzi will forfeit his No2 spot.

"We will not fight Thabiso now," said Toweel without mincing his words a few minutes after Phuzi had displayed his brilliance and superior power over vastly experienced Malawian Mussa Ajibu. He won in three rounds in the main bout of Supreme Boxing Promotion's tournament in Randburg.

Ajibu, who has fought top boxers, including Olanrewaju Duradola - who was beaten by Mchunu for the NABF title in the US in 2014 - Maksim Vlasov and Ilunga Makabu, went down three times in round three prompting an immediate stoppage. That was his 13th defeat against 28 wins with 24 knockouts and five draws.

"I am building Akani slowly," said Toweel. "I want Akani to gain experience before we can think about that bout."

Phuzi is the reigning Gauteng and WBA Pan African champion. He is undefeated after eight wins with four knockouts.

In the event Phuzi refuses to face Mchunu, the next available contender is Chris Thompson.

Trainer passes on fight for SA title
Sport
3 years ago

But a match-up between Mchunu and Thompson does not seem possible because the two boxers are trained by the Smith brothers - Sean and Peter Smith.

But, again, history can be rewritten with Mchunu and Thompson meeting inside a roped square. Stablemates at the Durandt gym of trainer Nick Durandt, Malcolm Klassen and Cassius Baloyi met for the IBF junior lightweight title in a historic bout that was staged by Branco Milenkovic in Mahikeng in 2009.

Durandt prepared Baloyi while Klassen opted for outsiders Gert Strydom and Bernie Pailman who guided him to a seventh-round stoppage.

Other results on Sunday: