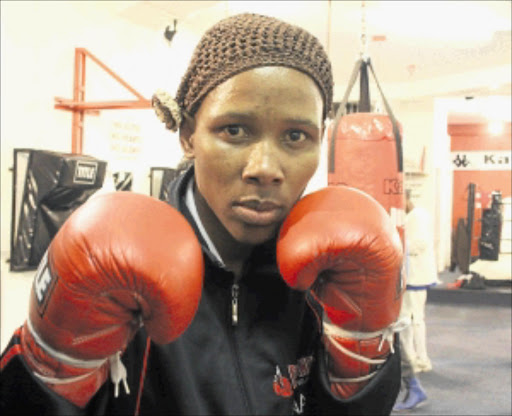 Unathi “Showtime” Myekeni’s two years of fame as the Wold Boxing F featherweight female champion ended on Friday night when the Mdantsane boxer was dethroned on points over 10 rounds by Nozipho Bell.

This was in the main bout of Showtime Boxing Promotions’ tournament at Nangoza Jebe Hall in Port Elizabeth.

Myekeni – who has previously held the WBF junior featherweight strap – was bidding the first defence. The boxer from Mdantsane won the featherweight title in September 2017 after defeating Asandiswa Nxokwana on points.

Bell‚ from Port Elizabeth‚ is also the reigning South African champion. While the newly-crowned champion improved to nine wins‚ two losses and a draw‚ the former champion suffered her fifth defeat in 17 fights.

Noni 'She Bee Stingin' Tenge gloves up for old foe

The fight is reported to have been a one-sided affair‚ with the aggressive Bell dominating the action from start to finish‚ putting on a master class and out boxing the courageous Myekeni.

Bell‚ who was coming down in weight after losing on points to Ewa Brodnicka in a bid for the WBO World junior lightweight title last October in Poland‚ delivered the best performance of her career. Myekeni showed tremendous heart by staying in the fight to the end.

Judges Prince Mbambaza‚ Eddie Marshall and Phindile Ngingi all scored it a shutout‚ 100-90 for Bell.

Myekeni’s home girl‚ Noni “She Bee Stingin” Tenge‚ repeated what the WBF junior middleweight champion did to Mapule “Thunder” Ngubane two years ago‚ defeating her on points ‚ but this time over eight rounds.

Melissa “Honey Bee” Miller‚ the pocket-sized boxer from Eldorado Park in the south of Johannesburg‚ chalked up the first defence of her bantamweight belt defeating Thema Zuma from KwaZulu-Natal on points over 10 rounds. Miller won that title in September after defeating Zuma in Sandton.

Razel Mohammed from Port Elizabeth and Nomandithini Ndyambo from East London drew over four rounds. The promoter was Mzali “Don Queen” Zantsi‚ who staged her first boxing tourney at home in Port Elizabeth and was assisted financially by the with Nelson Mandela Bay Municipality.

The accomplished female promoter – whose hard work and determination in the historically male-dominated sport has won many awards – had been based in Johannesburg for 20 years.

Other results ( all four rounders):