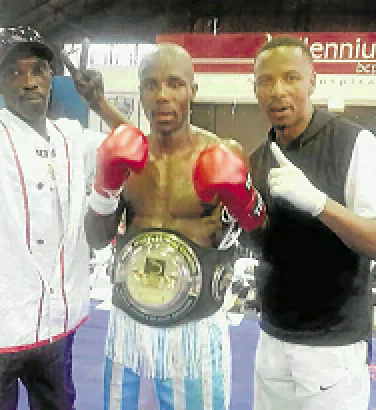 A grieving Eastern Cape boxer will put the title he dedicated to the memory of his late 11-month-old son on the line when he steps into the ring in Uitenhage on Sunday.

It is set to be an emotional day for Mziwoxolo Ndwayana as he dedicated the South African welterweight title to his son Lithongolethu after winning it in September last year a few weeks after the baby's death.

He seriously considered pulling out of the fight as he struggled to come to terms with his death but was talked out of the decision by his team at TK Boxing Promotions‚ who encouraged him to soldier on.

His perseverance in the face of adversity was rewarded when he beat former holder Sean Ness into submission in seven rounds at the Portuguese Hall‚ south of Johannesburg.

The boxer admitted that stepping into the ring at the Uitenhage Indoor Sports Centre to defend a title that has so much emotional significance to him would be a massive test.

‘‘I have not recovered fully from the loss of my son‚” he told TimesLIVE.

‘‘The grief comes and goes. It hits me the hardest when it is at night. But I believe God will not give me something that I cannot handle.

‘‘The mind is something. That was my second child. He was not ill. He was left by his mother at creche‚ healthy‚ 15 minutes later we received a call that he was gone.

‘‘I was able to prepare. When I am in the gym I am able to control it. It only hits me when I am home."

Ndwayana‚ the champion from Makhanda in Grahamstown‚ remains confident that he will brush past Odwa Gaxa of East London on Sunday.

"I cannot allow my bread to go away. What will my family eat if I allow this meal ticket to go away? It will be do or die on Sunday. The game plan is there. I will wait and see what happens‚ and take it from there‚" Ndwayana said.

‘‘We are ready. I know that when you fight a boxer from East London‚ it is someone who knows us because we have fought at Orient and Mdantsane.

‘‘His trainer KC Cengani also knows us. We've seen Gaxa in action. Our plan is according to those fights‚ and we added new things.

‘‘I don't think he will stand in our way to the international scene. If he can withstand the pain‚ then we will see out the whole 12 rounds but if he cannot‚ then only six rounds will be enough.”

The 12-rounder will headline the bill that is to be organised by Nyuswa Boxing Promotions of Mbulelo Mfama.

The secretary of the Nelson Mandela Bay Promoters Association (NMBPA) Sibongile Nkebe said this tournament was supposed to have taken place in December last year but matters beyond their control forced a postponement.

‘‘We complied with BSA who in turn sent us the sanctioning letter of the tournament last week.

‘‘The plea to our people is to come and support as well as enjoy action from balanced matchmaking in all our bouts.

‘‘They have been starved of action. We are elated that our municipality is behind us in making sure that we are able to provide action to both boxers and fight loving fans.”

Gaxa's trainer Kholisile Cengani said he was happy to go into the fight as an underdog.

‘‘I like to go to war as an underdog because of there is less pressure on you‚” he said.

‘‘I take a fight for my boxer knowing what to do. There is no difference going into this one. I need titles.”