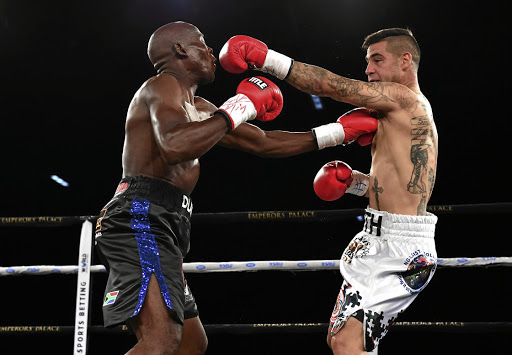 Supreme Boxing Promotions' tournament, scheduled to take place at KwaThema Civic Centre on the East Rand, has been thrown into disarray, because the Boxing SA sanctioning committee has invalidated Fernando Rodriguez from challenging Walter "Black Mamba" Dlamini for his SA middleweight title.

Dlamini won the title from Wade Groth in December.

Rodriguez has not fought since being knocked out in the fifth round by Dlamini at Kagiso Memorial and Recreational Centre in Kagiso on July 28 last year.

Rodriguez, whose corner was manned by Pius Dipheko, is rated No6 for Dlaminiwho must make his voluntary defence. He must chose the opponent.

Chairperson of the sanctioning committee, Khulile Radu, said: "Rodriguez is not a mandatory challenger. He had lost his last fight on a knockout. He definitely needs to redeem himself before he becomes eligible for a title contest."

When contacted for comment on the developments, promoter Sandile Xaka said: "BSA's director of operations Cindy Nkomo informed me about the decision. She said the information she got from Alan Toweel Junior, who trains Rodriguez, is that Rodriguez was not knocked out, but instead the fight was stopped due to a cut. Cindy then said Rodriguez's manager must write those facts and [submit] the proof of that fight to her and she will revert to the sanctioning committee."

Xaka added: "My plea to the sanctioning committee is to assist me in double-checking and see if it cannot allow me to stage the fight.But I don't mean that rules must be bent."

Dlamini, 38 from Limpopo who is trained in Johannesburg by Lionel Hunter - won the SA title last year from defending champion Wade Groth at Emperors Palace.

Dlamini had failed to win that title from then champion Christopher Buthelezi. But Dlamini won it in style - 42 seconds - from Groth and that was quickest SA title victory.