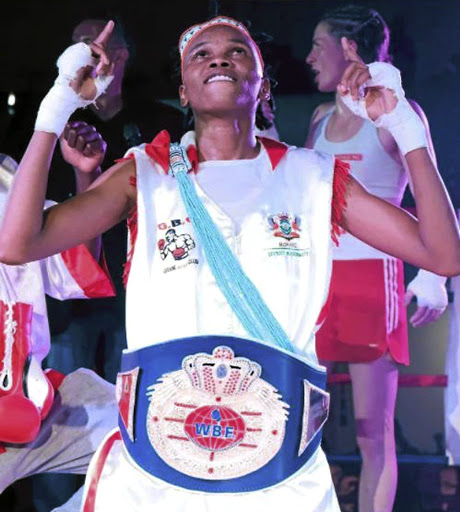 Bukiwe "Anaconda" Nonina sighed with relief when she was told yesterday that she is still the WBF bantamweight boxing champion.

The 27-year-old boxer from Dutywa in the Eastern Cape, whose career is guided in Venda by trainer Emmanuel Mutavhatsindi, was worried that the WBF championship committee may declare her belt vacant after she lost in an IBF Intercontinental featherweight belt in Denmark two weekends ago.

It is a normal practise by some sanctioning bodies that when their champion loses a fight whether in a title challenge or just a fight, then the belt they hold is declared vacant.

But WBF president Howard Goldberg, former boxing referee and judge, explained that Nonina's belt is simply hers. "She requested permission from us to challenge for another organisation's title and the fight was outside her weight division. Bukiwe is still our champion.

The fight against Sarak Mahfoud in Denmark was Nonina's first boxing match outside her weight class where she reigned supreme as the South African champion with five defences before she vacated the national title in 2017.

Nonina said: "I feel honoured to be still the WBF champion. I was brave enough to take the fight outside my weight division, risking my belt, but I am relieved to hear that the president of the WBF says I am still his champion. I will be defending my WBF title very soon."

He said that was because the Johannesburg-based boxer from Duncan Village near East London fought and lost a fight that was for another world boxing organisation in his weight division.

Ndongeni, who is trained by Sean Smith, was defeated by American Devin "The Dream" Haney for the vacant WBC international lightweight title in the USA on January 11.