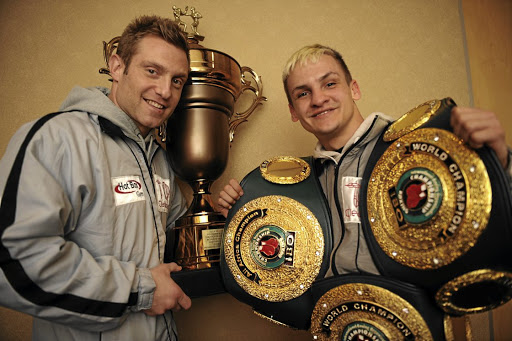 Trainer Colin Nathan, left, and his charge Hekkie Budler, whose loss to Hiroyoto Kyoguchi ended his reign as the WBA Super and the Ring Magazine junior-flyweight holder . / Tsheko Kabasia

Defeat in boxing is normal. It happened to the some of the best sweet science practitioners of yesteryear, including Joe "Brown Bomber" Louis and Muhammad "Louisville Lip" Ali, to mention but a few.

But what matters most is the contingency plan to bring a boxer back from defeat.

Louis had been undefeated in 23 fights, before he lost to Ezzard Charles.

His handlers brought him back against a not-so-great Cesar Brion, and Louis beat him to restore his confidence, which saw him chalk up seven straight wins before he finally lost to a young Rocky Marciano in 1951.

The "Brockton Blockbuster" went on to become the greatest and retired undefeated with 49 wins.

Ali was untouchable until he met a human locomotive train in Joseph "Smokin Joe" Frazier who humbled him in their WBA and WBC heavyweight championship at Madison Square Garden on March 8 1971.

MTK appoints him its African head
Sport
3 years ago

Ali came back against Jimmy Ellis and the former world heavyweight champion won that bout and took home the NABF belt.

Trainer Colin Nathan - who threw in the towel to rescue his charge - said: "I believe Hekkie has got another legit world title run in him.

But all that will depend on how he responds in his comeback fight, which will be in May or June here at home against an international opponent."

About Budler's stoppage, Nathan said: "It was very upsetting but I know that Hekkie was not physically well.

He was suffering from bad sinus issues. He is still young, at 30 and that is why he's got another title run on him."

The loss was Budler's fourth against 32 wins, with 13 knockouts.