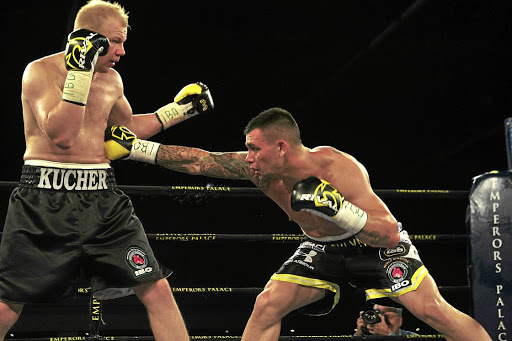 Lerena has, however, declared himself ready to face Thomas "Tommy Gun" Oosthuizen.

Berman hinted last week that the winner of the rematch between Mchunu and Oosthuizen, which took place on Saturday, could challenge Lerena in another cruiserweight showdown next year.

Mchunu avenged his loss to Oosthuizen in September with a lop-sided points win.

Probably the expectation was that Oosthuizen would defeat Mchunu so that Oosthuizen can challenge Lerena. What makes it impossible for a Mchunu-Lerena's fight now is the fact that they are trained by the Smith brothers - Sean and Peter.

"There is little to be gained by matching them," said Berman. "They will be steered in different paths."

But Lerena says he made a promise to Oosthuizen that he will give him what he termed a "money shot" he needed in June.

"I'll have my comeback fight in March then I will fight this fool in June, so from my side it's on. It will be the highest-earning fight between two South Africans for the IBO world title. I am gonna shut you up for good."

But Lerena will need to first deal with the matter of a dope scandal after the WBC announced last month that he had tested positive after Voluntary Anti-Doping Association conducted tests on him on October 18.

A source within the IBO said any IBO champion who tests positive for illegal or prohibited substance at any time whether in or out of competition subjects themselves to the possible loss of their titles and or fine at the IBO's discretion. Lerena's matter is in the hands of the IBO Championship Committee.