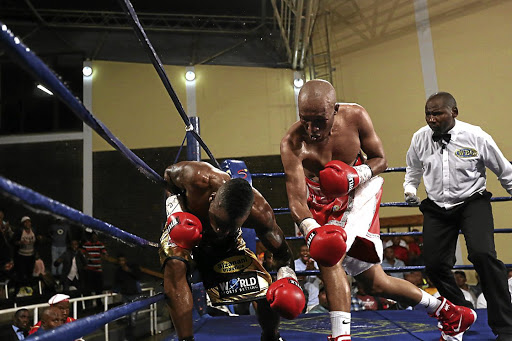 Simpiwe 'V12' Vetyeka stops Thompson Mokwana in the eighth round of their lightweight bout at the Orient Theatre. / MARK ANDREWS
Image: MARK ANDREWS

History was made in South African professional boxing on this day in 2013 when unheralded pugilist Simpiwe "V12" Vetyeka became the first local boxer to win the Super belt.

Not only did he dethrone Indonesian icon Chris John, but he also ended his illustrious career after stopping him in the sixth round for the WBA Super featherweight strap in Australia.

John was bidding for the eighth defence of the Super belt he won in 2009. He had been undefeated in 51 bouts.

Vetyeka's win made him the scourge of Indonesian boxing after that bout because he had previously stopped Daud Yordan earlier in the year for the IBO strap.

Vetyeka not throwing in the towel yet

Vetyeka lost the title under controversial circumstances to Nonito Donaire in 2014.

The skilful boxer who was born in Duncan Village and now lives in Mdantsane, had his successful career cut short by a car accident that injured both his legs in May.

Vetyeka chalked up 30 wins and 18 knockouts in 34 fights.

He said: "I had forgotten about that history. Nothing got done. I supposed that was because Nelson Mandela had died on December 5 so the focus was on him."

Vetyeka said the Eastern Cape government then had its annual awards and they did not recognise him at all.

"I was disappointed," he said.