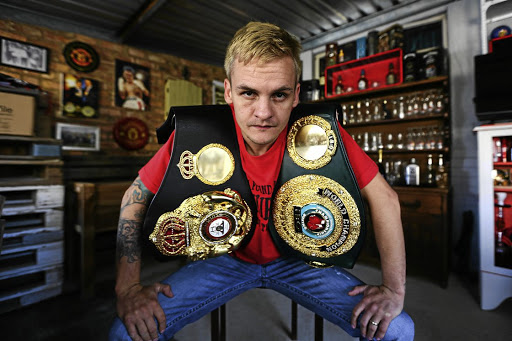 He survived the guillotine from the original list of 21 nominees. This is thanks to the six-member adjudication panel that recognised Budler's achievements.

The period under review is between September last year until August 31.

The panel has a gigantic task of choosing the ultimate winner who will be crowned next month in a province yet to be confirmed.

Budler's nomination serves as victory for boxing. In fact, this is the second time in succession that the panel acknowledges a boxer. Global star, WBO bantamweight champion Zolani Tete was also nominated last year. But the award was eventually won by world long jumper Manyonga.

Budler won both the IBF and WBA super title in Japan in May. His victory against Ryoichi Taguchi saw the tiny boxer take home the Ring Magazine belt.

That victory made him the first African to win three world belts simultaneously. It also made Budler, from Newlands, south of Johannesburg, the first South African to win the Ring Magazine belt under the current SA Boxing Act of 2001. The last SA boxer to bring this belt home was legendary Vic Toweel way back in 1950.

However, Budler vacated the IBF strap in July due to the low purse money offered for his mandatory defence against Felix Alvarado of Nicaragua.

The 30-year-old whirlwind performer - who has received eight belts in an 11-year professional career - said: "It is amazing to be nominated for such a great award. It's a great honour that I just cannot explain. This is one of the greatest honours in my career, let alone winning the award. I want to pay tribute to people who actually nominated me. It's really appreciated."