BSA limping from bout of challenges 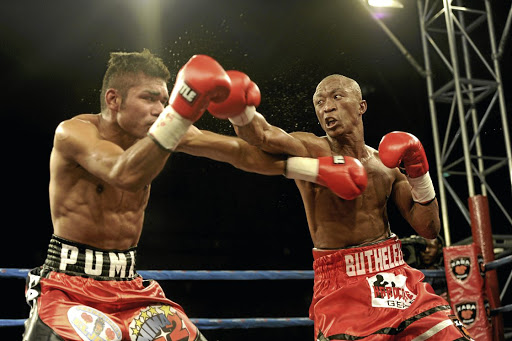 Gideon Buthelezi, right, exchanges punches with Angel Aviles. Buthelezi says the BSA is yet to pay the balance of the purse money after he defended his IBO bantamweight title. / Veli Nhlapo

Never mind what any gullible wordsmith waxing lyrically wants you to believe, the truth is there are serious matters at Boxing SA (BSA) that are caused by the alleged failure by leadership to take decisive action.

This has resulted in a catalogue of unresolved serious matters. Of the seven BSA board members, chairperson Peter Ngatane and Khulile Radu are two most experienced administrators and should be leading by example.

This would enable newcomers on the board including CEO Tsholofelo Lejaka and chief operations officer Cindy Nkomo to learn.

In July, Nkomo cancelled a boxing tournament because purses had not been deposited within the specified time but she was overruled by Ngatane and the tournament went ahead.

Gideon "Hard Core" Buthelezi, who defended his IBO junior bantamweight title on the night, says he has not been paid the balance of his purse money.

Tshabalala says that Ngatane and Radu convinced his boxer to take a lesser amount from what he had originally signed for with the promise that the rest will be paid a few days after the tournament.

The BSA is without SA championship belts and there is only one which is for display. It is used every time there's a title fight. This despite the fact that BSA gets R12-million every year from the sport and recreation department.

Free State, Limpopo, North West, Mpumalanga and Northern Cape are without provincial managers at the moment. Gauteng manager Archie Nyingwa is overworked because he also services five other provinces.

This has never happened since BSA was formed in 2001. Some promoters have cancelled tournaments and still do not pay boxers 10% of their purses, while it is alleged that others owe BSA sanctioning levies which have exceeded R2-million.

Some boxers have gone to fight outside SA without clearance from BSA and nothing has been done in terms of discipline. Some promoters' tournaments exceed the required total number of rounds while others have been told in no uncertain terms to cut down the rounds.

BSA still has to make a ruling on the Eastern Cape Boxing Promoters Association saga where promoters are divided into two camps.

Ngatane was not available for comment yesterday as he is in Saudi Arabia.

Radu said: "Look, we convened a series of meetings with all parties that were involved in the tournament that featured Buthelezi. It is not accurate to say myself and Ngatane convinced him to take a lesser purse."

Regarding SA belts, he said: "We are talking to one or two companies to design the belts and we will be making an announcement regarding the appointment of provincial managers to five provinces.

"BSA has come up with a new compliance major to promoters that anytime they apply to stage a tournament, they must pay a nonrefundable 10% of the total purse money."

On the issue of boxers going abroad without a clearance, Radu said the most glaring case was that of Ali Funeka who defied BSA twice.

"There is a case and he must answer."

"We managed to have the CEO go to Eastern Cape and talk to all the promoters. The one party attended while the other guys refused, he added, noting that like any organisation the BSA will have challenges to deal with "but I can say that all is hunky dory."