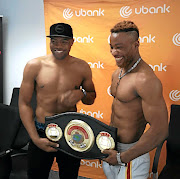 Image: Supplied Akani Phuzi, left, and Youssef Kasango Mwanza pose with the vacant WBA Pan African title that will be at stake when they meet on Sunday.

That is because the 24-year-old boxer, whose promising career is guided by Alan Toweel jnr, left an impression in April when he knocked Chris Thompson senseless in the second round for the Gauteng title.

Phuzi's savage blow qualified for Boxing SA's 2018 Knockout of the Year award. That knockdown was his third and he remains undefeated after five fights.

Fight fans love knockout artists and Phuzi has introduced himself as a puncher who can knock down an ox.

He will be facing the supremely built Congolese who is trained in Johannesburg by Manny Fernandes, in the main bout of the Supreme Boxing Promotions card.

Mwanza made his debut in SA on July 2 2017 when he defeated George Tshimanga before doing a number on Khayeni Hlungwane in December. Mwanza has eight wins in 10 fights.

Phuzi and Mwanza met at the pre-fight medical and weigh-in that was conducted by Boxing SA manager Archie Nyingwa in Midrand on Wednesday. Dr Solly Skosana did the medicals and declared the boxers fit and healthy.