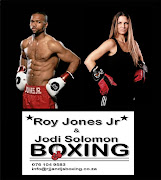 "The gym will be teaching and passing on the techniques, skills and knowledge of Jones himself," said Solomon.

"His itinerary includes media days, a VIP cocktail party at the gym and public opening of the gym on September 1."

Solomon, a 45-year-old mother of two, and Jones were in the corner on Sunday morning when Chilemba lost on points to WBA light heavyweight champion Dmitry Bivol in Atlantic City in the US. She said the opening of the gym would be a one-of-a-kind event for South Africa.

"It will be the first time that we have a legitimate boxing legend from the US invest his time and energy in trying to grow boxing in SA," she said.

"I believe that this will help reignite the flame and passion that all of us in boxing in South Africa are so desperately trying to light. His appearance must benefit us all and inspire young fighters to keep reaching for their dreams."

He retired this February after 66 wins, with 47 knockouts, against nine losses. One of his wins was against Thulani "Sugar Boy" Malinga.