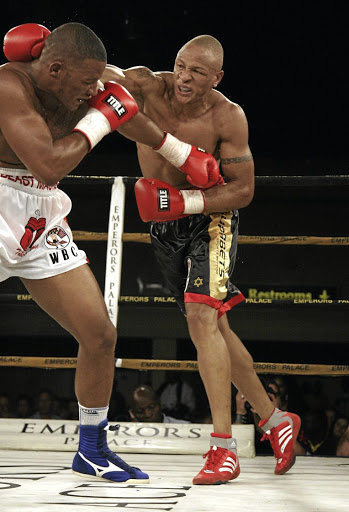 Isaac Chilemba, right, seen here in a previous bout against Vikapita Meroro, will be fighting for the WBA light heavyweight title in Atlantic City, US, on Sunday.
Image: DOMINIC BARNARDT

It could well be a case of do or die for ring veteran Isaac "Golden Boy" Chilemba when the South Africa-based Malawian boxer challenges for the WBA light heavyweight title in Atlantic City, US, on Sunday morning.

Chilemba, the 31-year-old former IBO super middleweight champion from Blantyre, must bring all his energy and effort into play when he attempts to oust Russian Dmitry Bivol as the WBA champion. Defeat for the WBC International light heavyweight champion could signal the end of the road.

Bivol, 27, will be bidding for his fifth defence of the title. He is still fresh but lacks big fight temperament, having boxed only 76 rounds in the professional ranks. He remains undefeated after 13 fights with 11 knockouts.

The Russian has completed only two 12-round fights. His last ring appearance was in March when he stopped Sullivan Barrera in the 12th round in New York.

Chilemba, who is trained by both Jodi Solomon (female) in Gauteng and Roy Jones Jr, a former professional American boxer, should overwhelm Bivol with big fight temperament and ring generalship. The challenger, who has boxed 254 rounds, has so far finished 10 fights billed for 12 rounds.

Boxing SA chairman Peter Ngatane has confirmed that although there was a letter from chief operations officer Cindy Nkomo cancelling a tournament at ...
Sport
3 years ago

Chilemba is fresh from a 12-round victory against Australian Blake Caparello for the WBC International title in March. The challenger has 25 wins, only 10 knockouts, five losses and two draws.

Chilemba is the first African boxer in history to challenge for three world titles in one night - the WBA, IBF and WBO straps - going the full distance with Sergey "Krusher" Kovalev in 2016.

This will be the third time in Bivol's last four fights that he and Kovalev will be on the same event. Kovalev, 36, has 32 wins with 28 knockouts against two losses and a draw while Alvarez, 24, is undefeated after 23 fights.