Mean Mukala back to his devastating best with wins 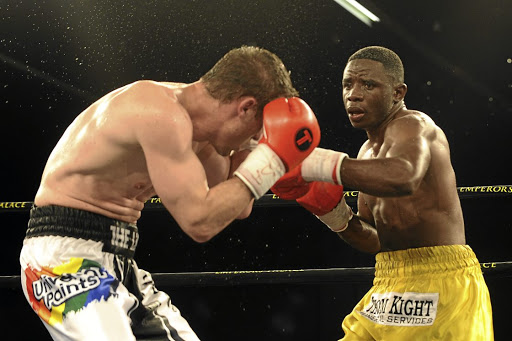 The management of WBA Pan African super middleweight boxing champion Patrick Mukala has done a great job in giving shape to the future of this hard-hitting fighter who has recovered fully from his points loss to Ryno Liebenberg over 10 rounds at Kempton Park in October last year.

The Panther, as his trainer Ashley Fourie calls him, has won two fights consecutively since that loss.

But Liebenberg is a far superior boxer to the previous nine opponents that could not cope with Mukala's potential.

If the idea of accepting that bout was to test waters, then Fourie knows what it means to build a fighter. The former professional boxer - whose gym is in Randburg, Joburg - has smartly lowered the standards in terms of accepting match-ups to build his charge.

Mukala has quietly knocked on the door internationally. He topped Satanta Sports Promotions bill at Carnival City where legendary ring announcer Brian Mulder told a big crowd that six bouts would be televised live around the world by Fox Television.

The international boxing world then saw what Mukala is made of. He mauled Ibrahim Maokola of Tanzania in three brutal rounds on Friday night.

In another WBA Pan African title fight, this time in the bantamweight division, Rofhiwa Nemushungwa took a hiding from Fadhili Majiha who overpowered the rangy local boxer over 12 rounds.

He threw the knockout punch to the apartheid regime.
Sport
3 years ago

Nemushungwa, 12-4-2, was overmatched against Majiha who recorded his 23rd win against 10 losses and four draws.

Another South African boxer, Leron Myles, suffered a crushing second demolition at the hands of SA-based Congolese Jackson Masamba. Again Masamba - who has a poor record of three losses - went in there with the intent to cause grievous bodily harm. Myles could have suffered brain damage from the blow.